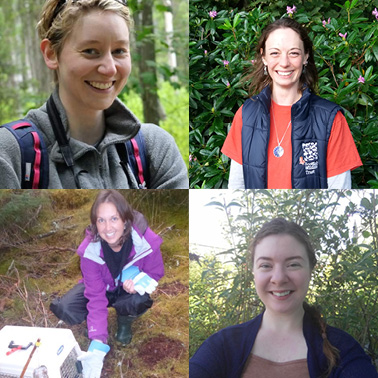 If you volunteer with us in South Scotland, you may have noticed a lot of coming and going amongst our project staff in recent months. Here’s a handy guide to who they are, where they are based and what they’ll be up to in the coming months and years.

Laura is the latest addition to the SSRS team, replacing Ann-Marie MacMaster who has returned to her original role as Conservation Officer for Tayside. Laura joins us from the Scottish Wildlife Trust’s Falls of Clyde Wildlife Reserve, where she was Ranger for eight years. In her new role she’ll be working with landowners and volunteers to ensure there is a strategic and effective approach to grey squirrel control across the Scottish Borders.

Alexa has recently changed roles, having previously worked as Conservation Officer for the region. Her new focus is on engaging with local communities and volunteers in the region’s priority areas; attending events, organising volunteer training and helping to establish new red squirrel volunteer networks in the Scottish Borders.

Stephanie has been the Conservation Officer for the region since July 2017, having previously worked as the South West Project Officer for Red Squirrels South Scotland (a predecessor project) between 2007 and 2011. With the full team now in place she’s focussing on helping landowners get on board in South West Scotland’s priority areas as well as liaising with volunteers to ensure the project achieves an effective approach to grey squirrel control.

Sarah officially joined Team Squirrel in April this year, having previously provided additional volunteer liaison support for the project. In her new role she is supporting the region’s flourishing volunteer networks as well as attending events and organising volunteer training.

Of course Laura, Alexa, Stephanie and Sarah aren’t working alone. They’re supported by the project’s Grey Squirrel Officers, not to mention the strong networks of local volunteers working together for the same cause.

Not sure who to contact? Email the project via the website or call the Scottish Wildlife Trust reception on 0131 312 7765 and we can point you in the right direction. You can also find all our staff contacts on the Our Team page.