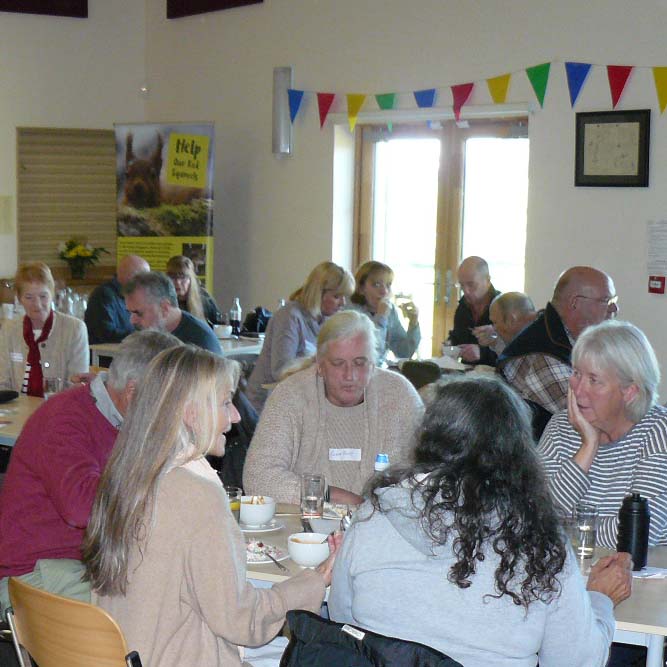 The first ‘Red Squirrel Forum for South Scotland’ conference took place in Johnstonebridge on Saturday 27 October, bringing together the many volunteer groups and individuals working to protect red squirrels across the region.

The event was a significant step in our collective efforts to develop landscape-scale community action across South Scotland, which is recognised as being key to the species’ long-term future here.

Representatives from nine volunteer networks attended, covering areas from Gatehouse of Fleet in the west to the Berwickshire coast in the east. The gathering offered a chance for volunteers to share their knowledge, experiences and ideas, as well as motivate and inspire one another.

On the day we also heard presentations about Cumbria and Northumberland, where some of the only remaining red squirrel populations in England are being successfully conserved through a strong network of volunteer groups, some of which have been operating for as long as three decades. We envisage that a similar level of coverage and cooperation can be achieved in South Scotland to provide the protection that these inter-connected red squirrel populations need to survive.

So what’s next for the Red Squirrel Forum for South Scotland? Firstly, the event provided an opportunity to reflect on the strengths and achievements of the existing volunteer networks, most notably:

The Forum also recognised that volunteers face several challenges to establishing widespread protection for red squirrels in the region, including:

Discussions throughout the day led to the beginnings of an overall vision and action plan for red squirrel conservation volunteering in South Scotland:

It’s inspiring to be around so many dedicated people all working together to ensure the long-term future of one of Scotland’s most loved species. Saving Scotland’s Red Squirrels is supporting volunteer networks in South Scotland, providing them with the equipment and training they need through our ‘Developing Community Action’ initiative. We’re also working to establish new volunteer networks in the region, which will instantly benefit from becoming part of such a welcoming red squirrel volunteering community.

You can read a full report on the Red Squirrel Forum for South Scotland website.