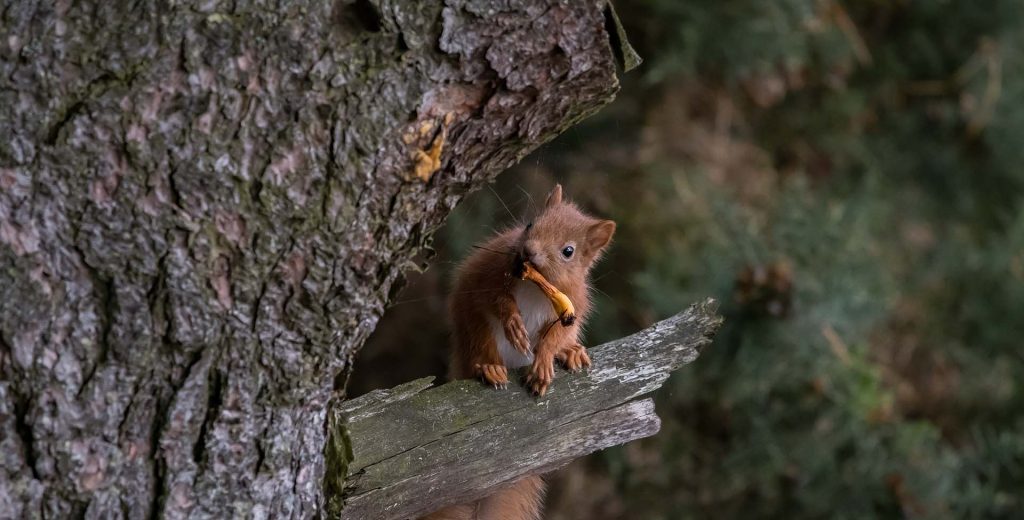 Red squirrels are one of Scotland’s most loved animals, and they are our only native squirrel species.

Red squirrels were once widespread throughout the country. There are still many places you could encounter one today, from the conifer forests of Galloway, to the Atlantic hazel woodlands of Argyll, to the country estates of Tayside or the Caledonian pine forests of the Highlands.

Red squirrel populations have seriously declined, with only around 120,000 remaining in Scotland today. In some places they have not been seen for many years.

The grey squirrel is a North American species that was first introduced to Britain in Victorian times, to decorate the gardens of large stately homes. They soon expanded their range, completely replacing red squirrels in most of England and Wales, and many parts of Scotland. The competition between red and grey squirrels is an unnatural, man-made problem that we have a responsibility to manage.

Some grey squirrels also brought Squirrelpox, a virus that they carry without harm to themselves. Red squirrels have no natural immunity to Squirrelpox, and the disease is usually fatal within two weeks. When Squirrelpox is present, grey squirrels can replace red populations around twenty times as fast as they can through competition alone.

The destruction of woodland has also contributed to the red squirrel’s decline. Habitat fragmentation, when areas of woodland become separated by development and changing land-use, is also problematic. These isolated areas are often too small to support healthy and sustainable populations of wildlife, including red squirrels.

What is squirrelpox and what can be done about it?

Squirrelpox virus (SQPV) is carried by grey squirrels without causing any symptoms, but causes fatal disease in red squirrels. It produces weeping scabs around the eyes, nose, mouth, ears, feet and genitalia. The infected squirrel is very quickly unable to feed properly, and rapidly becomes unwell. Squirrelpox is usually lethal in red squirrels within about 15 days of infection.

The virus is already established in south Scotland, and is spreading northwards. It is likely that it will eventually spread through grey squirrel populations further north into the Central Belt and as far as the Highland Line.

There is currently no available evidence to suggest that red squirrels in Scotland have developed immunity to squirrelpox. A study in Lancashire indicated that approximately 8% of red squirrels exposed to SQPV may survive infection during an epidemic and produce protective antibodies. However, with such a low red squirrel survival rate, the vacated habitat is rapidly colonised by grey squirrels, and red squirrel populations are effectively prevented from recovering from the disease outbreak.

A squirrelpox vaccine is currently in development but it could be many years before this is available in a practical and affordable form that could support large-scale red squirrel conservation.

At this time, to protect Scotland’s red squirrels from squirrelpox, it is necessary to use targeted and co-ordinated grey squirrel control in carefully chosen areas. Keeping grey squirrel densities very low prevents them from moving into habitat made available when red squirrels suffer a disease-related decline. Furthermore grey squirrel populations at low densities cannot sustain circulating SQPV through the reduced rate of transfer of the virus.

Both mathematical modelling and the project’s earlier work have shown that keeping grey squirrel densities very low can help red squirrels not just to survive but to thrive, even returning to some areas from which they had been absent for many years.

You can help prevent the spread of squirrelpox and other infections by ensuring wildlife feeding equipment is regularly disinfected, and by removing any feeders visited by both red and grey squirrels. 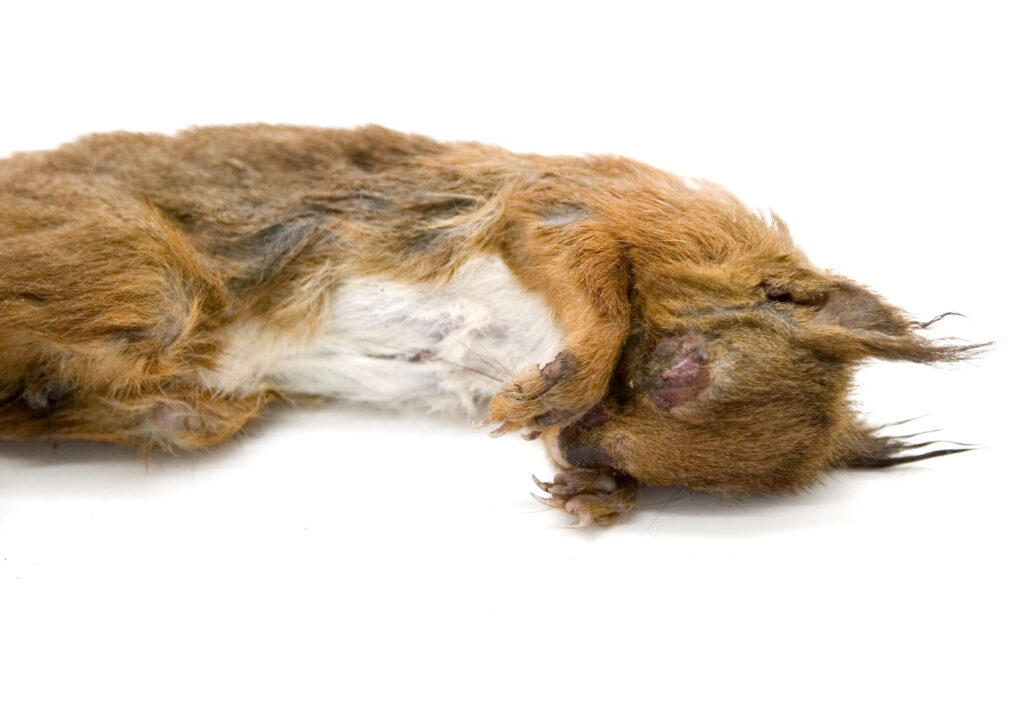 
What should I do if I find a dead red squirrel?

If you find a dead red squirrel that looks obviously diseased, please contact your nearest SSRS Conservation Officer or email squirrels@scottishwildlifetrust.org.uk so that follow-up action to protect local red squirrels can be taken if necessary.

It is likely that we would wish to send the carcass for post mortem in order to identify or eliminate Squirrelpox virus as the cause of disease. In the meantime please place the body somewhere safe where it cannot be carried off by animals or exposed to flies until collection can be arranged.

Although we are not aware of diseases that can be transferred from red squirrels to humans it is important to follow normal hygienic precautions. Use disposable gloves or put your hand in a polythene bag to avoid handling the animal directly.

We also request that any other dead red squirrels you find are sent for post mortem, even if it is clearly a road victim that looks otherwise healthy. Our colleagues at the Royal (Dick) School of Veterinary Studies are carrying out a long-term health study of Scotland’s wild red squirrels and these specimens are a valuable contribution to that work.

A copy of our guidance on how to package and label the squirrel carcass and the postal address can be downloaded from our Publications page. Please follow the directions carefully to ensure your parcel reaches its destination intact.


What is red squirrel leprosy?

Over the years Saving Scotland’s Red Squirrels have had a number of queries accompanied by photographs of red squirrels with a distinctive skin disease. In 2005 the Royal (Dick) School of Veterinary Studies in Edinburgh found that the organism causing the disease was similar to Mycobacterium lepromatosis, a bacterium that causes leprosy in humans.

The disease is unmistakeable: there is gross swelling and loss of hair around the snout, lips, eyelids, ears, genitalia and sometimes feet and lower limbs. This bare skin has a “shiny” appearance. The squirrel is usually in generally poor body condition and may have a heavy burden of parasites like fleas, ticks and mites.

We do not believe that leprosy is sufficiently common to pose a serious threat to the overall survival of red squirrels in Scotland. The main disease threat remains the squirrelpox virus.

The risk to people from squirrel leprosy is negligible. The bacteria that causes leprosy cannot survive outside the body, and evidence shows that 95% of humans are naturally unable to contract leprosy, even if they are exposed to the bacteria. Taking sensible precautions such as avoiding physical contact with wild animals and washing your hands before eating will further minimise any risk.


What laws relate to squirrels in Scotland?

The Animal Health and Welfare (Scotland) Act 2006 provides for duty of care for animals in captivity (live-trapped animals). This makes it an offence to inflict, or allow others to inflict, cruelty or abuse on a grey squirrel held captive.

The Wildlife & Countryside Act 1981 (as amended) makes it illegal to release, or allow to escape to the wild, any captive grey squirrel.

The (Prohibition of Importation and Keeping) Order 1937 makes it an offence to keep a grey squirrel in captivity except under licence.

The Grey Squirrels (Warfarin) Order 1973 does not allow the use of warfarin on grey squirrels for the purpose of tree protection in Scotland.

This is not a definitive guide to the legislation and you should refer to the original legislation if you need more details.

IMPORTANT
Do not attempt to trap or destroy grey squirrels without seeking advice first. If you are resident in one of our project areas, your local Red Squirrel Conservation Officer can offer advice and training on how to help control grey squirrels in a way that is legal, safe and humane.


What should I do if grey squirrels are damaging my garden or loft-space?

Do not attempt to trap a grey squirrel unless you have a means of dispatching it. The Wildlife & Countryside Act 1981 (as amended) makes it illegal to release, or allow to escape to the wild, any grey squirrel you have caught, and the (Prohibition of Importation and Keeping) Order 1937 makes it an offence to keep a grey squirrel in captivity except under licence.

If you live in one of our project areas your local Red Squirrel Conservation Officer can offer advice and training on how to help control grey squirrels in a way that is legal, safe and humane.

Outside of project areas you will need to engage the services of a pest control company.


Can I feed red squirrels in my garden?

Like all animals, red squirrels instinctively know what they need to maintain a healthy and balanced diet. In most cases, if you have red squirrels in your area then there must be a ready supply of natural food nearby.

Many people like to give red squirrels a helping hand, especially in summer when their natural food is harder to find. Red squirrels will often visit bird feeders, but you can also buy (or make) specially designed squirrel feeders. For more information on what you can feed your garden red squirrels, download our supplementary feeding guide from the Publications page.

There are risks to feeding red squirrels. Over-feeding can create an unhealthy reliance on the food, which can cause harm to squirrels if the food supply suddenly stops, or is not providing them with all the nutrients they need to stay healthy. Lots of extra food can also artificially boost the local red squirrel population to unnatural levels. Consider feeding red squirrels sporadically, or only at certain times of year.

Feeding stations can also create a higher risk of disease spreading from one animal to another, including the squirrelpox virus. It is therefore very important that feeding equipment is regularly disinfected with an anti-viral solution (for example Virkon S). If you live in an area where red squirrels are present, and grey squirrels begin visiting your garden, it is advised that you stop feeding immediately.


How do I respond to a planning application that concerns red squirrels?

Planning decisions have the potential to affect the long-term health of Scotland’s wildlife. Although Saving Scotland’s Red Squirrels are unable to directly assist with planning issues, the following links from project partners provide useful advice and guidance in the event that planning or housing developments are proposed near a possible red squirrel habitat.

NatureScot is the licensing authority for removal/disturbance of protected species’ places of refuge in a development situation. They have created a comprehensive document, ‘guidance on planning and protected animals’ with specific information and advice regarding red squirrels.

Further advice and links can be found on the NatureScot website surrounding red squirrels and licensing.

When enquiring about a planning application, certain information will prove useful. We recommend finding the planning application number (planning details are in the public domain and can be found on the local authority website). Here, you should be able to see how far on in the application process the development is, and whether the developer has taken account of the red squirrels (and other protected species) in their planning application. The information on NatureScot’s pages above should tell you what to look for in terms of survey reports and mitigation proposals.

The next step is to contact your local NatureScot office and ask to speak to someone about red squirrels threatened by development – it will come in helpful to have as much detail to hand as possible.

Both the Scottish Wildlife Trust and the RSPB have planning guidance available on their websites for further reference.

Where to see Red Squirrels

Scotland is home to around 75% of the UK red squirrel population, meaning you stand a better chance of seeing them here than almost anywhere else in the country. The map highlights just some of the locations where you can see red squirrels. If you are lucky enough to spot one, please remember to submit a squirrel sighting following your visit - it can make a big difference!