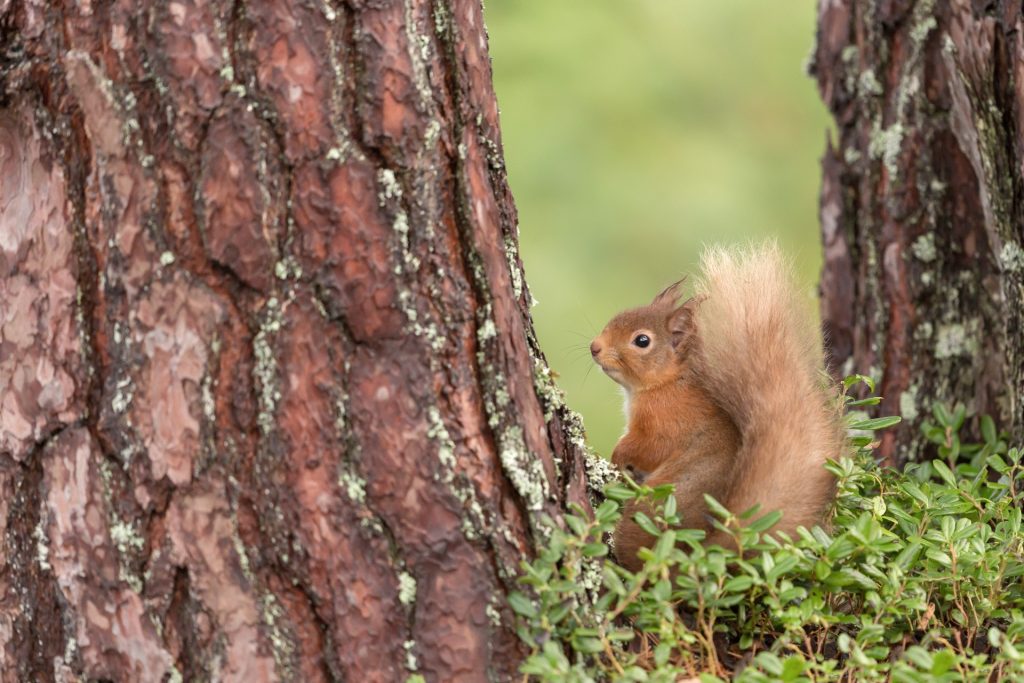 Saving Scotland’s Red Squirrels is a partnership project that is working to ensure red squirrels continue to be a part of Scotland’s special native wildlife.

While 75% of the UK’s remaining red squirrels are found here, their numbers have fallen drastically in recent decades.

This is largely due the spread of the non-native grey squirrel, which was first introduced from North America by people in the late 1800s. Grey squirrels also carry squirrelpox, a virus that doesn’t harm them but is deadly to reds.

With the help of partners, landowners and local volunteers, the project is monitoring squirrel numbers across Scotland, managing the impact of squirrelpox, and helping to combat the spread of grey squirrels in key strategic areas.

In your area Our partners and funders

In 2017, Saving Scotland’s Red Squirrels began a new phase called ‘Developing Community Action’. Alongside vital conservation work, the project  focused on engaging with local communities and individuals, inspiring them to take action to protect red squirrels where they live.

This phase ended in March 2022 and Saving Scotland’s Red Squirrels has secured funding for a further two-year Transitional Phase to enable continued support for some local volunteer groups that aren’t quite ready to function independently.

Community action is the key to long-term, sustainable red squirrel conservation in Scotland, with the added benefit of connecting more people with the nature on their doorstep. From participating in operational surveys to helping out at events, volunteers of all backgrounds can help ensure red squirrels continue to have a home in Scotland.

How does the project control grey squirrel numbers?

We use live-trapping in cage-traps according to best practice guidelines, and then dispatch the animal in the most humane way possible. All staff and volunteers participating in grey squirrel control are fully trained and must follow a strict protocol.

Our management methods are designed to ensure public safety, and minimising any animal distress is uppermost in our consideration. The methods we have adopted have been deemed the most humane by the European Scientific Panel on Animal Health and Welfare (2005).

*Note that the project cannot support or regulate shooting of grey squirrels in the wild. It is not possible to carry out wild shooting as a Saving Scotland’s Red Squirrels volunteer or to be covered by the Scottish Wildlife Trust’s volunteer insurance. For more information on shooting, please contact the British Association of Shooting and Conservation.

Are there any alternatives to grey squirrel trapping?

At this time, halting further spread of grey squirrels in strategically targeted areas is the only viable option to fully protect the strong red squirrel populations we still have across Scotland. Trapping or shooting* are the only available means of doing this in Scotland. The SSRS project utilises live cage-trapping according to best practice guidelines, and then dispatches the animal in the most humane way possible.

Grey squirrel contraception is the subject of research, as is the development of a squirrelpox vaccine. However, these are a long way from being ready for use and may be insufficient on their own. There are suggestions that in the future Scotland’s recovering pine martens could also play a role in controlling grey squirrel numbers in some areas.

These potential solutions are promising for the future of red squirrel conservation in Scotland, and the project is following their developments closely. However, we simply can’t afford to wait in the hope that they will work. The story south of the border has shown us that red squirrels can be completely replaced within the space of a few years, especially when squirrelpox is present.

What about creating red squirrel sanctuaries?

Sanctuaries could allow red squirrels to survive in small numbers in specific places in Scotland. The project collaborates with Scottish Forestry in developing ‘red squirrel strongholds’, nineteen large woodland networks that could serve as refuges for red squirrels if their decline were allowed to continue. These predominantly Sitka spruce forests are not ideal habitat for red squirrels, but their very paucity can more or less exclude greys . They are also poor habitat for a range of other wildlife, so the strongholds need to be kept to restricted areas as far from grey squirrels as possible.

Therefore the aim of the Saving Scotland’s Red Squirrels project is to strategically protect Scotland’s currently widespread red squirrel and help them thrive in as much of their original range as possible. We believe this is both feasible and desirable for maintaining Scotland’s natural heritage and biodiversity.

Translocations of red squirrels may sometimes be appropriate. For example, in places where forests have been restored after earlier habitat destruction has caused the local extinction of red squirrels, especially when there is no reasonable prospect of the squirrels making their own way there. Licensing must be sought from NatureScot for translocation projects.

Research in Ireland has shown that the recovering Irish pine marten population is causing grey squirrels to decline in range and numbers, allowing a complete recovery of red squirrels in areas occupied by pine martens. A similar effect has also been found to occur in several parts of Scotland where pine martens are present.

The relationship between pine martens and grey squirrels is not fully understood. While pine martens take significantly more grey squirrels than reds as prey, this is unlikely to provide the full explanation. It should be noted that although pine martens will also take red squirrels, they are both native Scottish species with important roles in the woodland ecosystem, and it seems the two species can thrive together in the right conditions.

However, pine martens are still recovering from years of persecution in Scotland and it may take a long time before they can make a real difference in the effort to save Scotland’s red squirrels.

MORE CONTACTS
In Your Area
North East Scotland
In Your Area
Tayside
In Your Area
Argyll, the Trossachs & Stirling
In Your Area
South Scotland
We use cookies to ensure that we give you the best experience on our website. If you continue to use this site we will assume that you are happy with it.Ok