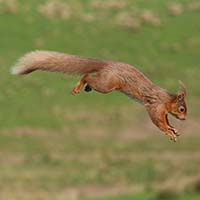 This week marks the official end of ‘Developing Community Action’. The past five years have gone incredibly fast! So what happens next?

Funded by National Lottery Players, ‘Developing Community Action’ saw the SSRS team expand to its largest ever staffing level, with ambitious aims to boost our engagement with local communities, build a network of skilled volunteers and, of course, protect red squirrels by managing the spread of grey squirrels in priority areas across Scotland.

We’ve faced significant challenges along the way, not least due to the impact of Covid-19, but there is a lot to celebrate, from red squirrels making a comeback in Aberdeen to the network of 18 volunteer groups now taking action across the south of Scotland.

And it’s not the end for Saving Scotland’s Red Squirrels. In December we were delighted to announce that the project has secured funding from project partners and the National Lottery Heritage Fund to continue work for another two years, from April 2022 – March 2024. If you volunteer with us you can find out what this means for your group and your area on our Volunteer FAQ page.

What will we aim to achieve?

Saving Scotland’s Red Squirrels has always been reliant on short-term funding cycles. Over the next two years we want to work with partners and other stakeholders to develop a more sustainable, permanent programme capable of securing the long-term survival of core red squirrel populations of the Highlands, Argyll, North-East Scotland, northern Tayside and Stirling. The programme will also deliver the required support and co-ordination to voluntary groups and individuals actively delivering vital long-term protection of red squirrels in key areas across the country.

In this project phase we’ll also continue to carry out vital conservation work in key areas:

We’d like to say a huge thank you to everyone who has made Developing Community Action possible – our partners, funders, landowners, staff past and present, and our volunteers. This new project phase will bring about some changes to the SSRS team, and we’re waving goodbye to several colleagues. You can find out who to contact for your region on our contacts page. Want to join the team? We have several vacancies with closing dates in April, apply via the Scottish Wildlife Trust here.

Whilst we are delighted to have had over £1.1m pledged to the project so far, we are still urgently in need of a final £49,000 to fulfil our aims. You can help us by donating to the Scottish Wildlife Trust appeal today.