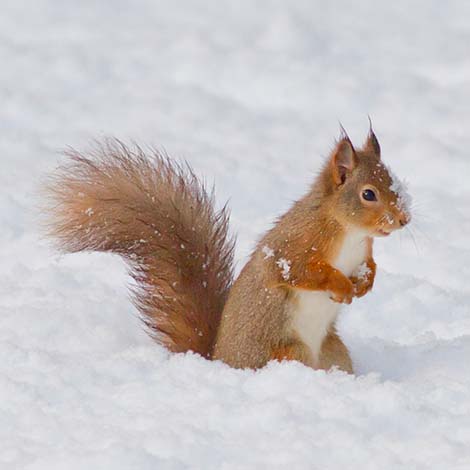 The Scottish Wildlife Trust is pleased to announce that the Saving Scotland’s Red Squirrels project has secured initial funding for a two-year transitional project phase in April 2022.

This ‘booster’ phase will enable the project to complete its aims and plan for the long-term future, leaving a legacy of sustainable and community-led red squirrel conservation across the south of Scotland. Vital conservation work will continue in all the project’s priority areas to help mitigate some of the challenges the project has faced in recent years.

Supported by project partners, the new phase will run from April 2022 to March 2024. Project Manager Dr Mel Tonkin said: “Thanks to the hard work of our staff, volunteers, landowners and partners we’ve seen some fantastic success stories in the past five years. But the project has also faced challenges, particularly due to the impact of Covid-19. During lockdown much of our grey squirrel control and survey work was suspended. This additional two years will help us further secure the red squirrel’s place amongst Scotland’s special native wildlife.”

Scottish Wildlife Trust Chief Executive Jo Pike said: “We’re delighted to have secured funding to enable the two-year transition phase to take place. The strength of the collaboration between partners, the quality of the data and evidence gathering, and the extraordinary contribution from volunteers have all combined to make this a project that is rightly viewed as an exemplar of invasive non-native species control. We very much look forward to continuing the important work to secure the future of red squirrels in Scotland.”

Grey squirrels continue to pose the greatest threat to red squirrels in Scotland. An invasive species that was introduced to Britain from North America in Victorian times, grey squirrels out-compete reds for food and living space and have rapidly replaced native red squirrel populations across most of England, Wales and Scotland’s Central Belt. Grey squirrels can also carry squirrelpox, a virus that doesn’t harm them but is deadly to reds.

One of the project’s key aims is to build a network of local volunteers in priority areas across the south of Scotland, where healthy red squirrel populations are surrounded by greys and squirrelpox is a major threat. The aim is to upskill these volunteers to enable them to continue red squirrel conservation work after the project comes to an end. Today there are 18 volunteer groups operating successfully across the region. Whilst some groups are ready to proceed with little further support from the project, others require further support to enable them to become fully community-led.

In the North East, the project has worked towards the removal of an isolated population of grey squirrels that was introduced to Aberdeen in the 1970s and spread to the surrounding countryside. Today, grey squirrels are largely limited to the centre of the city and eradication is considered achievable.

In the Central Lowlands, grey squirrels are successfully being prevented from spreading north of the Highland Boundary Line, protecting Scotland’s core red squirrel populations in the Highlands and Grampian. Ongoing work in this region is essential, as evidenced by recent grey sightings in Aberfeldy.

The project has also focussed on public engagement at both a local and nationwide level, with over 1000 people reporting squirrel sightings online as part of September’s third annual ‘Great Scottish Squirrel Survey’ campaign.

Saving Scotland’s Red Squirrels is a partnership project led by the Scottish Wildlife Trust and includes NatureScot, Scottish Forestry, Scottish Land & Estates, RSPB Scotland and the Red Squirrel Survival Trust. In 2017 the project was awarded £2.46 million from the National Lottery Heritage Fund. The project has secured an initial £1.08 million from project partners for the two-year transitional phase, but will need further resources to put all project plans into action, which will be finalised in the new year.