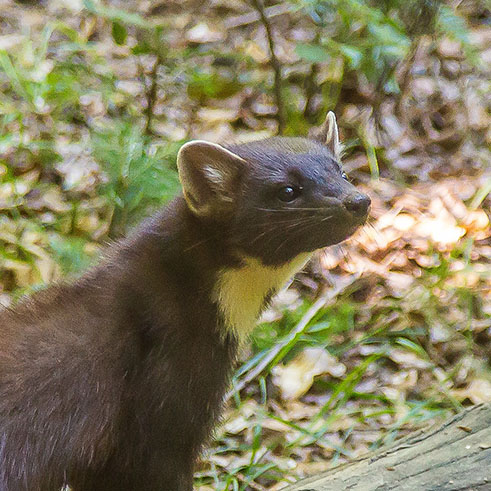 Research carried out in Northern Ireland has highlighted the importance of native woodland for the long-term protection of red squirrels.

The research modelled red squirrel populations in non-native conifer forests with the presence of pine martens— a natural predator to the red squirrel in both Scotland and Northern Ireland. Pine martens had been persecuted to near-extinction in Scotland, but thanks to legal protections and reintroduction schemes they are gradually making a comeback across the country. Despite their appetite for squirrel, previous research has shown that the return of pine martens spells good news for our native reds, as their presence will reduce the number of grey squirrels in an area and enable the red population to recover. Unlike the non-native grey squirrels, pine martens and red squirrels have evolved to co-exist in our natural ecosystem.

However, a new paper from Queen’s University Belfast and University of St Andrews suggests that in non-native conifer forests, the presence of pine martens may cause a decline in red squirrels. The predator’s appetite switches from grey squirrels – which are often absent in commercial conifers – to red squirrels. The researchers, together with Ulster Wildlife, bring into question red squirrel conservation strategies that focus on the planting of such forests.

In Scotland, non-native conifer forests are planted for commercial purposes. By the 1930s red squirrel populations were in serious decline in the UK, but the extensive conifer planting that started soon after the First World War has provided a vast additional area of habitat. Because grey squirrels don’t readily survive in them, Sitka spruce forests can help red squirrels by providing a refuge when grey squirrel numbers are overwhelming in the wider landscape.

However, without the threat from greys, red squirrels are best suited to a mixed habitat of native conifer and broadleaf woodland, where they can enjoy a varied diet and reap the benefits of greater biodiversity. This is why the Saving Scotland’s Red Squirrels project focusses its efforts on protecting red squirrels through landscape-scale targeted grey squirrel control, helping reds to thrive in as much of their original range as possible.

Conifer monocultures are not the ideal habitat for red squirrels, and we believe should be viewed as a last line of defence if regional grey squirrel control cannot be sustained. Scottish Forestry have identified ‘red squirrel stronghold’ forests that could support red squirrels in this worst-case scenario.

Back in 2018, we welcomed the news that pine martens were found to have a positive impact on red squirrel populations in Scotland. Landscape-scale grey squirrel control is a considerable conservation challenge, so it’s encouraging to know that pine martens are lending a helping hand, and may even take over much of our work in the future.

More research is required to better understand if the situation in Scotland’s conifer forests would differ from Northern Ireland, but in both countries the full recovery of the pine marten is far from complete. In the meantime, a regional approach to both grey squirrel control and woodland management will be necessary for many years yet to ensure the best protection for our native red squirrels.