Bob Peace from the Glenkens Red Squirrel Group shares his inspiration for getting involved in red squirrel conservation and explains how the volunteer group has gone from strength to strength in recent times.

So I got involved initially with the Spring Survey at two sites in the Glenkens locality which I found very rewarding. Then in autumn 2014 a public meeting was held in New Galloway, hosted by Saving Scotland’s Red Squirrels to discuss the future conservation of the red squirrel. Government funding was being reduced and the future of SSRS was in the balance. Local groups of volunteers were seen to be the answer. From seeds sown at this meeting the Glenkens Red Squirrel Group was formed with a small nucleus of dedicated volunteers.

Now the real hard work started. I became treasurer and other executive positions were (loosely) filled! A basic constitution was drawn up on a model provided by SSRS. An initial ‘start-up’ grant from SSRS kicked off the finances and the long process of setting up a bank account commenced. To be successful we needed equipment so a shopping list was drawn up. This gave us an idea of future funding needs and a basis on which to focus particular potential funders. It made sense initially to target local funders and the Glenkens Community Shop provided a small grant in 2015 to help fund a number of traps and another grant in 2016 which allowed us to purchase a bespoke gazebo. Other funding was generously given by local estate owners. 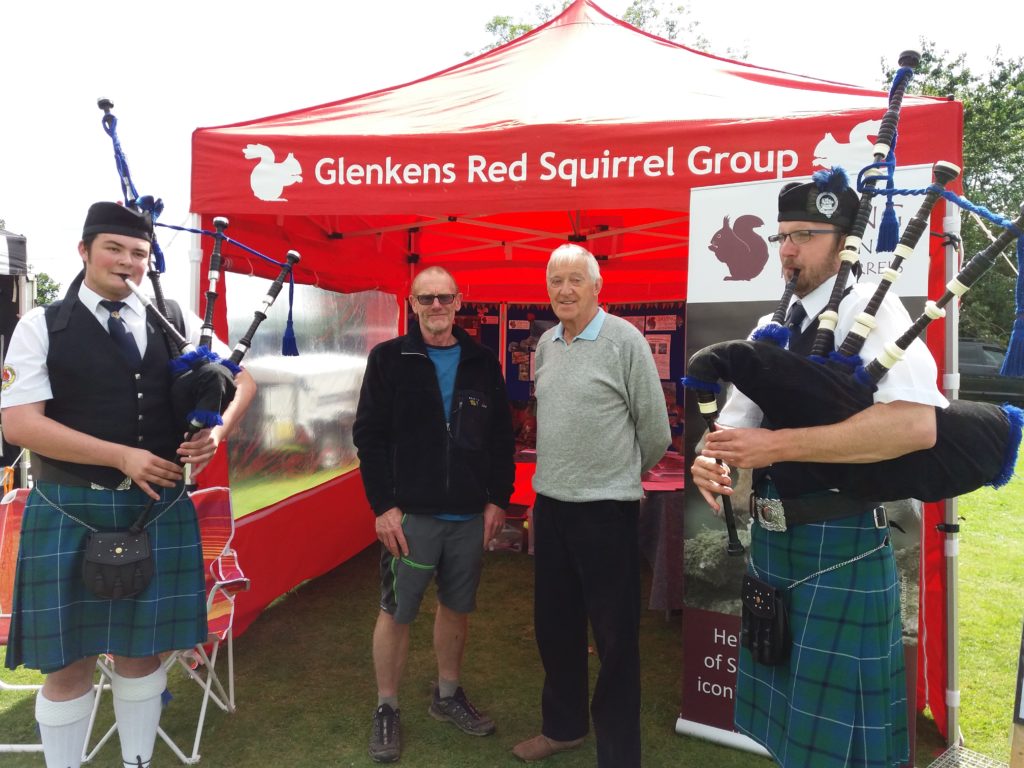 With our gazebo we were able to attend local shows, galas etc. which raised the profile of our group, the plight of the red squirrel and also acted as a platform to attract more volunteers and monetary donations. This is hard but satisfying work with little financial gain! Our presence in the public eye spawned more awareness and local press reports highlighted our work and aims.
Other grant applications were submitted but failed to attract success. Undaunted we continued and finally at the end of 2017 we heard that we had been successful in securing funding through the Galloway Glens Landscape Partnership for a period of five years to the tune of £22,600. This required match funding which was available through ‘volunteer hours’. It is therefore vital that all time spent on “squirrel duties” is recorded by all member volunteers of the Group. With our first quarterly cheque in the bank we have been able to purchase more trail cameras and a vital piece of equipment – a thermal imager.

What does the future hold? Who knows? As a Group we have had a good measure of success but recognise that this and also the failures have to be carefully managed. I have had a great deal of enjoyment through my volunteering with the Glenkens Red Squirrel Group and derive much satisfaction from the many comments I receive from people who are supportive of the Group’s work. Believe me, despite the occasional negative comment, it is worth it.

Find out more about the Glenkens Red Squirrel Group by liking their Facebook Page, or visiting the Red Squirrel Forum for South Scotland website.