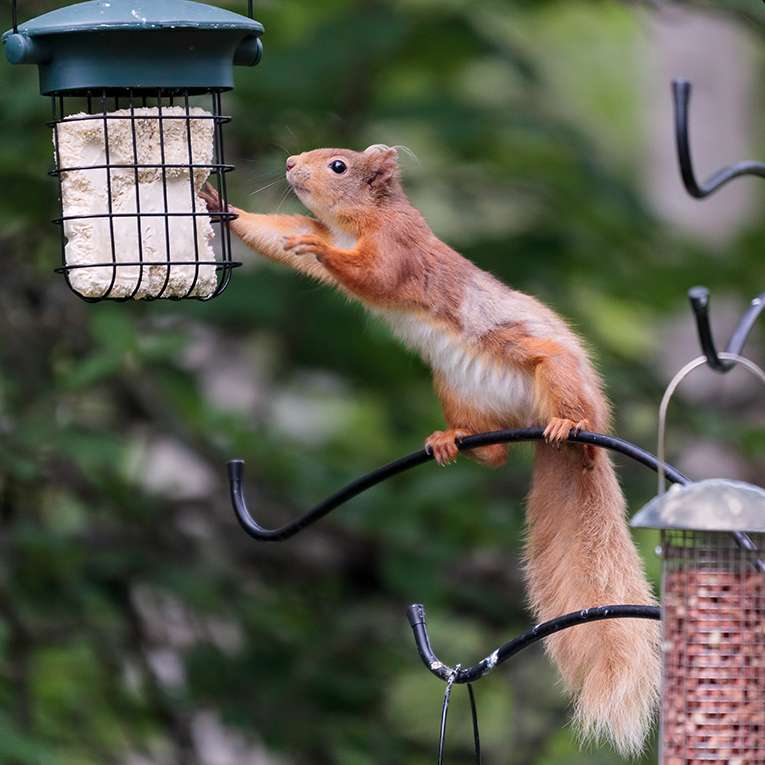 During the Covid-19 lockdown in Galloway, members of the Squirrel Group in and around Gatehouse of Fleet have continued to monitor their local red squirrel population from the comfort of their own homes and gardens. Peter Garson tells us all about a garden count scheme which just keeps on running.

Seeing red squirrels when you are out in the woods is really not that easy – an occasional chance event for most of us. It’s a lot easier if you have a thermal imaging scope, as this kit detects heat and can even ‘see’ though the vegetation, although coming in at a high price means this is not a feasible option for most of us. Reds are naturally sparse in broadleaf woodlands (where greys can be up to ten times more common), but at least there are few leaves to obscure our view for half of the year. Conifers provide a much better habitat for reds and are more important for them as greys do less well there – but the dense foliage and close spacing of trees in plantations makes it really hard for spotting squirrels.

So, whilst we can map chance sightings of reds, how can we get a handle on how many squirrels there are out there in Gatehouse? This is important, because distribution and abundance are the two key measures of conservation status for threatened populations through time – we really need to measure both.

Providing food for red squirrels via bird feeders in gardens is the way most of us get to see them regularly. Some people put up the special feeders with a flip-up lid, which keeps the food dry and reserves it for squirrels, although if you are lucky you might get a pine marten: they like nuts too! If we work as a team locally, we can use the rather frequent visits by reds to our garden feeders to measure how our local population varies through time. This requires a bit of coordination so that the information is collected in a consistent way and on a regular basis. And of course, if a grey turns up, it’s time to take the feeders down for a while and sterilise them with Virkon-S, to reduce the likelihood of our reds catching squirrelpox. But, if we react quickly in this situation it may be possible to remove some greys before they move on.

The easiest and most memorable statistic to record is the maximum number of reds you have seen at the same time. This will certainly be less than the total number of reds living in your area but it is probably a good indicator of their local numbers. So, the Gatehouse survey team of over 20 households simply sends in their monthly maximum number of reds seen at once (anywhere in the garden, not just at the feeders).

If you spend a bit of time looking at them carefully with binoculars (such a pleasure and denied to most people!) it is often possible to recognise individuals from differences in their coats, such as the colour of their body and tail, and the length and colour of their ear-tufts. This allows us to make an estimate of the number of different individuals we have visiting our gardens over the course of a month. Some individuals look identical, so this counting method will probably also produce an underestimate of the actual number visiting your patch.

Reds do change in their appearance when they moult and grow a new coat (twice a year), so over a period of several months you could be misled into thinking that you have lost one and attracted another. This is why we choose to record our numbers for each month, and are now proud to be in our fourth year of collecting this information. Counting squirrels is much more difficult than counting sheep, but that does not mean we should not try!

These counts should at least enable us to judge whether our local population is increasing, stable or decreasing year on year, which is what we really want to know. Look at our results to date in the chart below.

Some points to note:

The general trend over the years is pretty level, implying that our red population has remained stable. Meanwhile greys have certainly been present in greater numbers and have bred more in our area during 2019/20 than previously. For now, we can probably argue that this change has not had a significant effect on our red squirrel population. Our continuous efforts to control the greys may have helped to maintain the status quo for reds. But increasing evidence of pine martens in our area may also be relevant – they have now repeatedly been shown to depress grey squirrel presence without adversely affecting red squirrel populations! Whatever, we intend to keep on watching, counting and enjoying the red squirrels in our gardens…

Find out more about the Gatehouse Squirrel Group and how you can get involved here. Or visit the SSRS Network Directory to explore volunteer network groups near you.