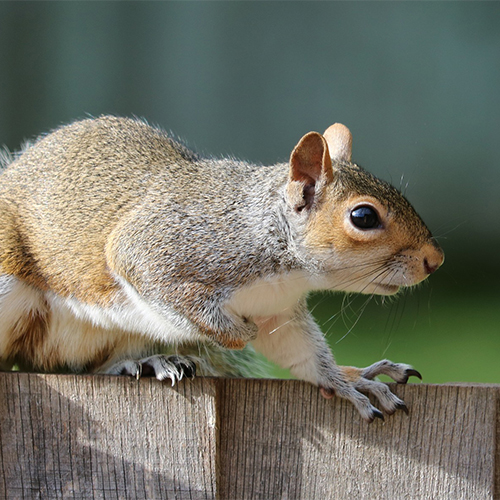 Following a report of two grey squirrels in Aberfeldy, Saving Scotland’s Red Squirrels are asking Perthshire residents in the Aberfeldy, Dunkeld and Pitlochry areas to be on high alert. Locals are urged to report all sightings of grey squirrels to help protect Perthshire’s red squirrel populations.

Over the last week, two sightings of grey squirrels have raised concern for the security of Perthshire’s red squirrels. Grey squirrels are known to occur in Dunkeld and Birnam, and in lesser numbers as far north as Dalguise. These most recent reports from the Aberfeldy area mark a potential northward spread of grey squirrels which could have serious consequences for the area’s red squirrel populations.

The greatest threat facing Scotland’s red squirrels today is the presence of the invasive non-native grey squirrel, which were first introduced in the late 1800s and soon replaced red squirrels throughout most of the UK.

Larger and more robust, grey squirrels outcompete reds for resources such as food and living space, making it difficult for red squirrels to successfully breed and for their young to survive.

Saving Scotland’s Red Squirrels (SSRS), a National Lottery-funded partnership project led by the Scottish Wildlife Trust, have been monitoring squirrel populations across the country since 2009. This year, SSRS have received an increase in squirrel sightings reported from the Dunkeld and Birnam area which initially raised concerns that grey squirrels could be dispersing further north towards Pitlochry and Aberfeldy.

Tayside Conservation Officer, Ann-Marie MacMaster, warned: “We have received large numbers of reports of both species of squirrel this spring and summer, suggesting that both species have benefited from the bumper seed crop of autumn 2019, followed by a very mild winter. This boost could mean that grey squirrels are at an advantage and have dispersed further than they would have in a more typical year. We need to gain a full picture of what is happening on the ground, and the only way to do this is by asking the public to help by reporting sightings of any grey squirrels seen north of Dunkeld.”

In Tayside, the project has been undertaking grey squirrel control focused along what is known as the ‘Highland Line’ – a 10km-wide strip which runs from Montrose, through Kirriemuir, Dunkeld, Crieff and out to the west of Scotland. SSRS aim to prevent grey squirrels from becoming established north of this line in order to secure the long-term survival of red squirrels in the Highlands and Grampian.

In recent years, grey squirrels have been largely confined to the Highland Line thanks to these ongoing efforts and support from local estates and residents hosting a trap in their gardens.

Ann-Marie added: “Without help from the local community and targeted action, grey squirrels could become established in Aberfeldy, Pitlochry and beyond. This would undo the hard-won successes achieved in the last ten years.”

Reporting sightings of both red and grey squirrels at scottishsquirrels.org.uk is one of the simplest ways for people to help support one of Scotland’s most loved, and most threatened, species. Each sighting enables Saving Scotland’s Red Squirrels to target efforts to protect local red squirrels as well as those still thriving across Scotland’s northern regions.

The grey squirrel can be identified from its native cousin, the red squirrel, by its larger build, being almost twice the size of a red squirrel. Unlike the red squirrel, greys never have ear tufts, are predominately grey in colour, with a distinct ‘halo’ or silver fringe around the tail. All sightings are valuable and have a role to play in protecting Scotland’s red squirrels, whether they are from your back garden or the wider countryside.