Red Squirrel © No Bad Photos
Skip to content
Home / Posts from 21st February 2019 / How many red squirrels are there in Scotland? 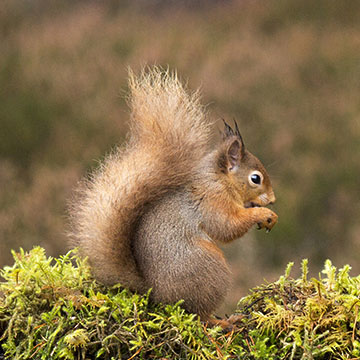 Yesterday we published our 2018 squirrel survey report. It concluded that while red squirrel populations are stable in most parts of Scotland, in the south they continue to be threatened by disease and competition from the spread of non-native grey squirrels.

Many papers have reported that our survey only detected 59 red squirrels in South Scotland – a very alarming figure! However, our survey isn’t designed to count squirrel numbers, it’s designed to help us understand how red and grey squirrel distribution is changing over time.

In the report, 59 was quoted as the number of locations in the south of Scotland that were surveyed in both 2017 and 2018, and could therefore be compared. The figure isn’t linked to squirrel numbers, or squirrel distribution.

What does the spring survey tell us?

Each year between March and April, staff and volunteers monitor four feeder boxes placed within a 2km square called a ‘tetrad’. Hair samples are collected from the feeder boxes at two-week intervals, which are then analysed under a microscope to determine the species. This gives us a good indication of whether that tetrad contains red squirrels, grey squirrels, both species, or no squirrels.

Of course, in one year a feeder box may not be visited by every species in the area, but when compared over the course of many years, this landscape-scale approach to monitoring can provide a strong indication of how both species are faring.

By understanding where in the country red and grey squirrels are either expanding or reducing their range, Saving Scotland’s Red Squirrels can asses the impact of its conservation work, and make better decisions about where to focus efforts in the future.

Do we know how many red squirrels there are in Scotland?

Not really. Counting the actual number of red squirrels is a near impossible task, and like most small animals their numbers will vary naturally from year to year depending on factors like food availability and weather. It’s been estimated that there could be around 120,000 red squirrels left in Scotland, 75% of the UK population as a whole, but this is very much a ballpark figure.

What we do know is that while the red squirrel’s range has declined in recent decades, there are still many parts of Scotland— including in the south—where healthy, viable red squirrel populations exist. It’s not too late to save them, which is why we’re working with local communities to build the skills, resources and enthusiasm that will ensure their long-term protection.