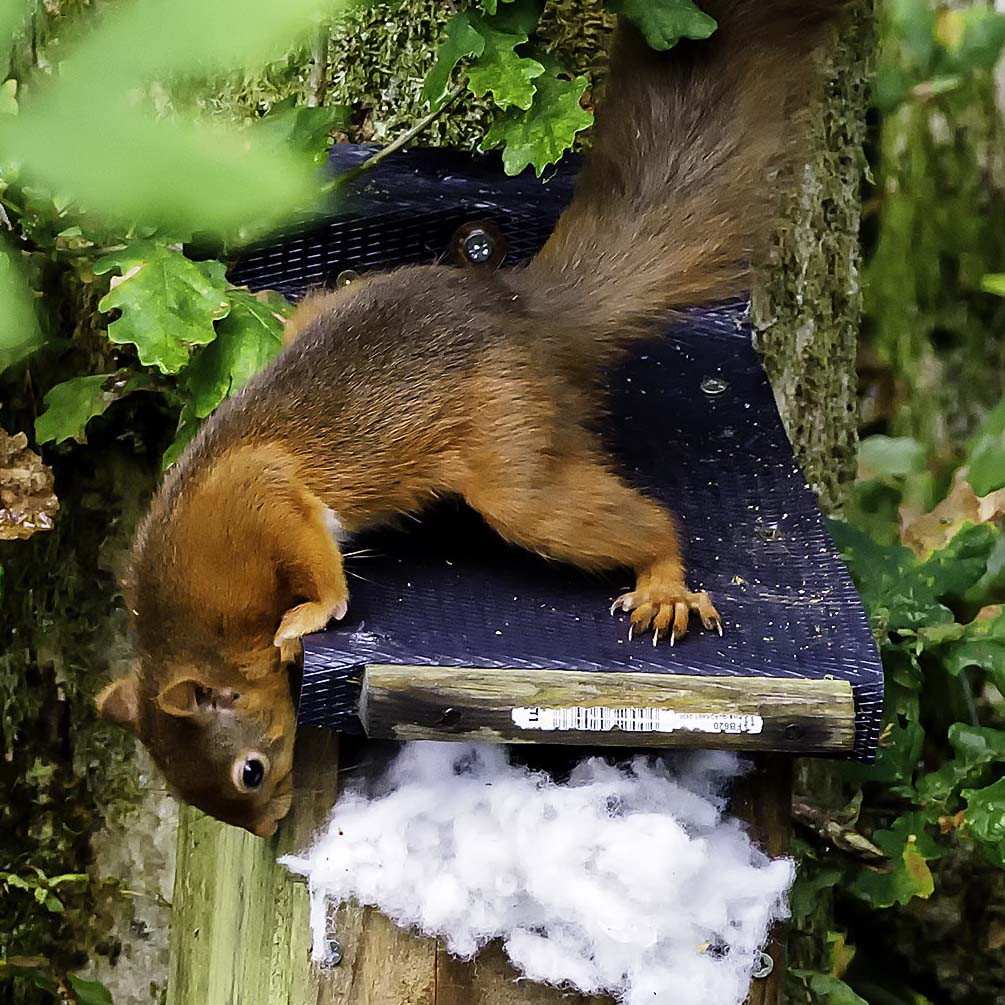 It’s about this time of year that many red squirrels set to work on producing a second litter of kits. Guest blogger Dr Sarah Garven gives us an insight into the life of a red squirrel during the busy breeding season.

Spring has made its late but very welcome appearance after the erratic and inclement winter weather. An abundance of natural wonders are associated with springtime and as for many other species, is when birthing and nurturing young become a priority for red squirrels. Watching red squirrels is always rewarding and there are behaviours specific to this time of year to look out for.

Mating behaviour may have begun as early as December and can continue through the spring and summer. Females are only fertile for one day in each cycle and several males compete for the right to mate. Adult squirrels racing around are likely to be participating in a ‘mating chase’, where multiple males chase a fertile female. Squirrels chase across the ground, race round tree trunks and leap through the branches. It can be noisy, with the sounds of scrabbling claws as well as chirping and calling, and results in a brief mating episode frequently with the heaviest male earning the right to mate.

The exterior appearance of breeding dreys resembles an untidy ball of sticks, however the interior boasts a soft lining of mosses, leaves and grasses. Breeding dreys tend to be fairly large, around the size of a football, and are most often situated in a forked branch, supported against the trunk, around 6 -12m above the ground. Squirrels with large mouthfuls of moss or grass are collecting fresh lining materials.

Red squirrel breeding is influenced by a number of factors including availability of food, weather, and body condition. Body weight, closely linked to food abundance, is integral to breeding success; female squirrels must reach a minimum weight to breed (around 280-300g). In areas where food is plentiful, two litters of kittens (or kits) may be born, the first in early spring (Feb/Mar) and the second in summer (May/June). Mothers in good body condition produce heavier kits, which are subsequently more likely to survive their first year.

Gestation lasts 5-6 weeks, after which time around 3-4 kits are born, although litters of up to six are possible. The blind, hairless kits, weighing 10-15g, are entirely dependent on maternal care while they are in the nest and until they are weaned as the males take no part in caring for young.

The mother will leave the kits alone in the nest to forage, her absences becoming longer as the weeks pass, and the kits grow. If a mother feels disturbed or threatened while she has young, she will move them to another drey, carrying them one by one in her mouth, and she may have several dreys for this purpose.

Witnessing the very tiny kits emerging from the drey for the first time requires a keen eye. Venturing out from around mid-April onwards, at around seven weeks old, they remain close to the nest and are usually accompanied by their mother. They take their first steps along their branch, test their balance, and begin to investigate the world. Around now they also start trying solid food, the first step to becoming fully weaned by 10 weeks. Kits are initially darker than adults but by twelve weeks their coat colour is approaching the adult shade.

Littermates tend to stick together and are likely to still be occupying the breeding drey even after they are weaned and mother moves out. These juvenile siblings, who are around half adult size, might be spotted together playfully exploring, often during the day, as they take advantage of the adult squirrel’s rest period. Any intolerant mature squirrels in the area might detract from their new found independence, so they tend to avoid the beginning and end of the day when the adults are active.

Squirrels frequently don’t stray far from the maternal drey for much of the summer but the majority of juveniles will have dispersed by autumn. It is estimated that only 15-25% will survive their first winter. Red squirrels reach sexual maturity by 9-10 months of age, so with sufficient food supplies and body condition, survivors can produce their own offspring in their first year.

WHAT YOU CAN DO

If you find an ill or injured squirrel or young in need of help, contact the SSPCA who can care for them.

If you are lucky enough to spot squirrel families or young ones venturing out, registering your sightings, and sharing any photographs you may have, will help monitoring and protection of this iconic species

Sarah is a freelance writer with a background in veterinary medicine. A subsequent PhD and a qualification in conservation medicine has guided her writing which is inspired by the natural world. She covers all manner of wildlife, conservation and environmental issues.