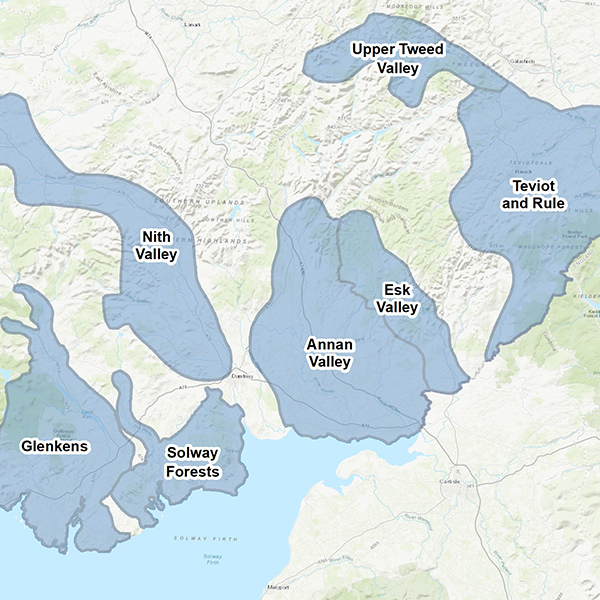 PARCs were first introduced in 2014, as a new approach to red squirrel conservation action in southern Scotland aimed at targeting limited project resources to the areas where they will provide the greatest benefit to red squirrel populations in the region. From years of project experience we know that to successfully protect red squirrels, it is essential that grey squirrel control operations are sustained and coordinated across a landscape; focusing our work on priority areas gives us a stronger chance of achieving this.

Whilst we aim to create enduring networks of red squirrel protection measures within these PARCs, in order to ensure they remain effective, it is necessary that the PARCs retain some flexibility so that we can adapt to changing situations in the region. In 2019, several of the original PARC boundaries were reviewed and redrawn based on the latest evidence on the ground.

Decisions were based on a variety of factors such as the presence of healthy red squirrel populations, the urgency of threat from grey squirrels, support and cooperation from local landowners and the presence of existing volunteers and red squirrel network groups or sufficient human populations from which new volunteer networks could develop. The most recently revised PARC boundaries are shown below:

Many of the PARCs sit alongside large upland conifer forests where red squirrels have a natural advantage over grey squirrels. These include Galloway Forest Park, Ae Forest, Eskdalemuir, Craik, Wauchope and the Tweed Valley forests. The PARCs generally occupy lower-lying areas with greater accessibility to local people, and with concentrations of habitat that are favoured by grey squirrels (in which red squirrels are often excluded by the presence of greys).

By targeting efforts to the grey squirrels’ preferred woodland, we can create reservoirs of high quality habitat for red squirrels to reoccupy. This creates breeding populations of the native species as a source for recolonising conifer forests, should the populations there chance to come under pressure owing to seed-crop failure. In better conifer-seed years, red squirrels in the forests would likewise be able to colonise neighbouring lowland PARC areas. This complementary system aims to better secure the species’ future in south Scotland.

Full details and guidance on new PARC boundaries can be found within our information download, including opportunities to support the project, within or out with PARC boundaries.