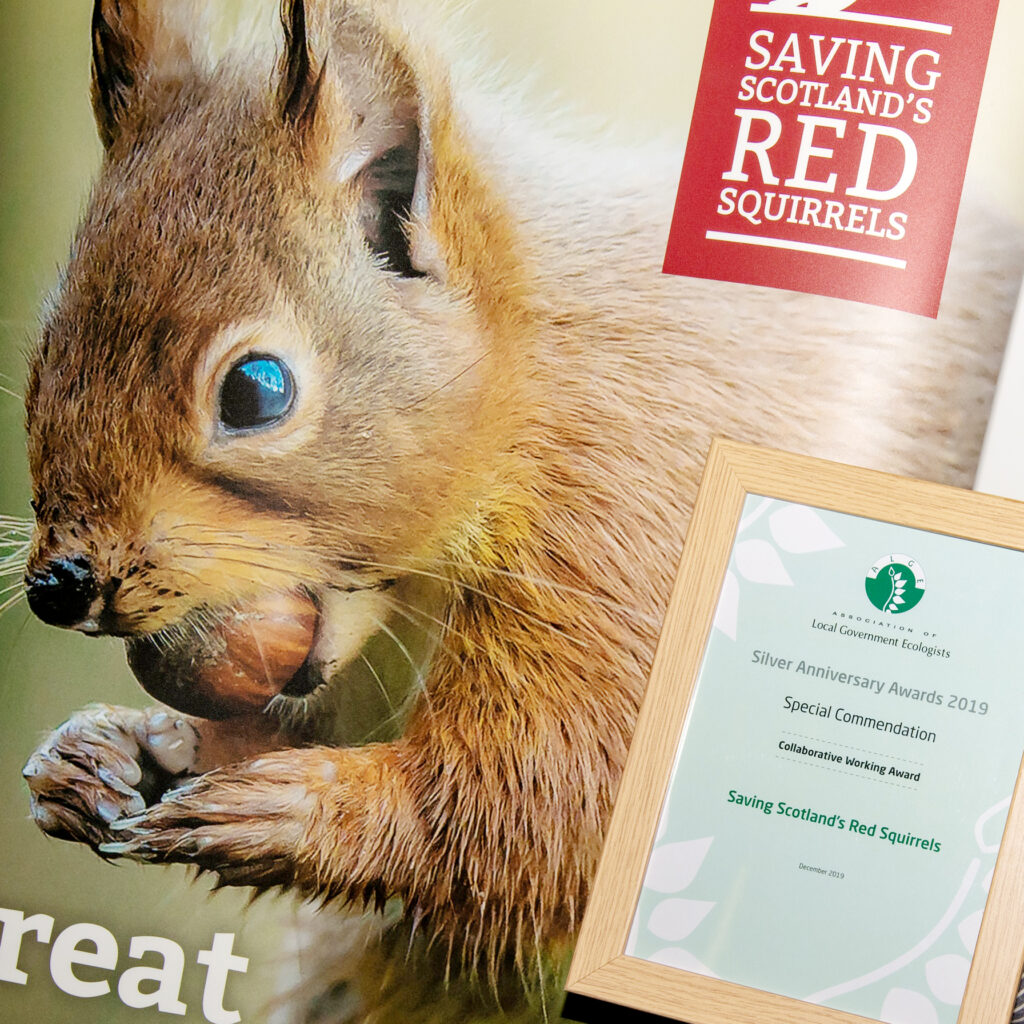 Saving Scotland’s Red Squirrels have been working in partnership with Aberdeen City Council to develop strategies for protecting Scotland’s native red squirrels in the North East since the project first began. At the ALGE (Association of Local Government Ecologists) awards in December, this work was acknowledged with a special commendation certificate.

Celebrating ALGE’s 25th year anniversary, the Association recognised its members’ and partners’ contributions to furthering nature conservation and the way it is delivered at local government level through a series of awards. Ten proactive projects and organisations were nominated for the collaborative working award; including the Scottish Wildlife Trust’s Saving Scotland’s Red Squirrels project.

Following years of targeted control efforts throughout Aberdeen City and Aberdeenshire, red squirrels have begun to recolonise and make their way back into the city centre. Aberdeen residents are now reporting sightings of reds squirrels returning to areas that have only known grey squirrels for several decades.

This result would not have been possible without the support of Aberdeen City Council; a collaboration that has facilitated access to, and management within crucial habitats on council land. The initiative has proven hugely successful over the years and was previously awarded an RSPB Nature of Scotland, Species Champion Award in 2014 for ‘the Return of Aberdeen’s Red Squirrels’.

Aberdeen City Council Countryside Officer, Ian Talboys said “The grey squirrels were introduced into Aberdeen by the Council of the time over 50 years ago, before the impact on the native red squirrels was understood. The current collaboration between Saving Scotland’s Red Squirrel Project and Aberdeen City Council has proved to be a great success.  It has meant that rapid progress has been possible to reduce the grey squirrel population and monitor the return of the red squirrels across the City.  The Council has also taken the opportunity to manage its extensive woodlands and create new connected woodlands to provide good red squirrel habitat for the future.”

Huge congratulations to all nominees and winners at the 2019 ALGE Silver Anniversary Awards.