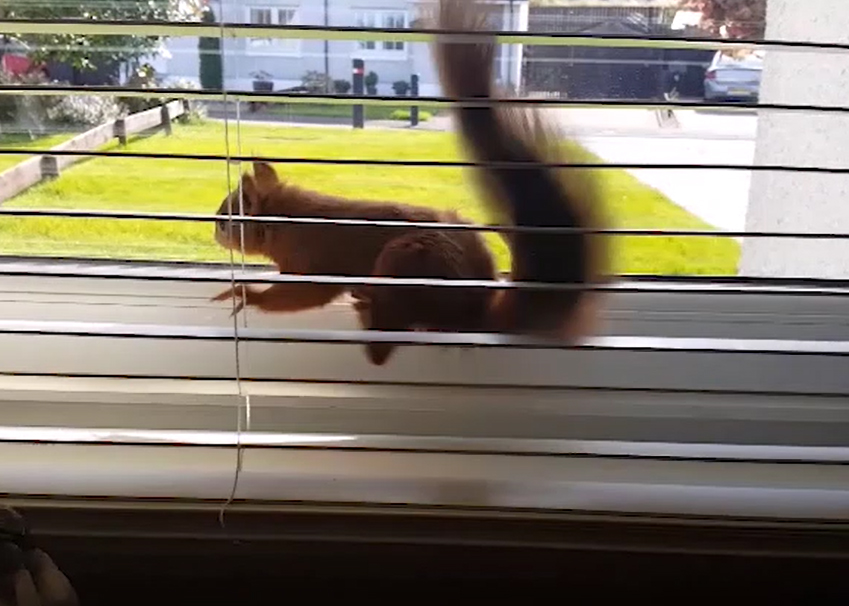 The first recorded red squirrel in Plean near Stirling in many years was spotted in the most unlikely of places – a local resident’s living room.

William Higgins was surprised to find the animal frantically scrambling around his home last month.

He said: “I was in the kitchen when I thought I heard the post being delivered. When I went to pick up the mail I found the wee rascal running around the living room at a hundred miles an hour, all over the furniture.

“I just wanted to let him out without hurting him. He went for the window so I lifted the blinds and opened it. He saw the opening and was off like lightning.”

The squirrel left unharmed by the incident, and Mr Higgins reported the sighting to Saving Scotland’s Red Squirrels, who monitor squirrel populations across Scotland.

Mary-Anne Collis, Saving Scotland’s Red Squirrels Conservation Officer said: “People will be much more used to seeing squirrels in the woods but this sighting is doubly surprising because it’s the first recorded red squirrel in Plean since our project began ten years ago, although we knew they weren’t too far away.

“It’s an encouraging sign that the work we’re doing to protect red squirrels in Stirlingshire with support from National Lottery players is having a positive impact. Plean is just the latest example of a town where people are reporting seeing red squirrels return after years of absence, we’ve also had recent sightings in Dunblane and Doune.

Stirlingshire is an important area for red squirrel conservation because it is on the boundary between Scotland’s core red squirrel populations in the Highlands and the populations of grey squirrels that are found across the Central Belt.

Grey squirrels are a non-native invasive species that was introduced to Britain from North America. They out-compete native red squirrels for food and living space, and can also carry squirrelpox, a virus that is deadly to reds.

They have completely replaced red squirrels in parts of Scotland, including much of Stirlingshire, but targeted control work carried out by Saving Scotland’s Red Squirrels is preventing them from spreading further and in some places allowing reds to recolonise.

Mr Higgins added: “I’m just so happy to see a red squirrel in this area. I can’t say for sure how he got into my house, but only way I can think of is through the letter box.”

People can report sightings of both red and grey squirrels on the Saving Scotland’s Red Squirrels website, scottishsquirrels.org.uk. The data helps the project monitor population changes over time and decide where to focus conservation efforts.

Mary-Anne added: “It’s incredibly exciting that red squirrels appear to be making a comeback in Plean and other parts of Stirlingshire, but we’d like to see more evidence. Everyone can help by keeping an eye out and reporting their sightings online.”