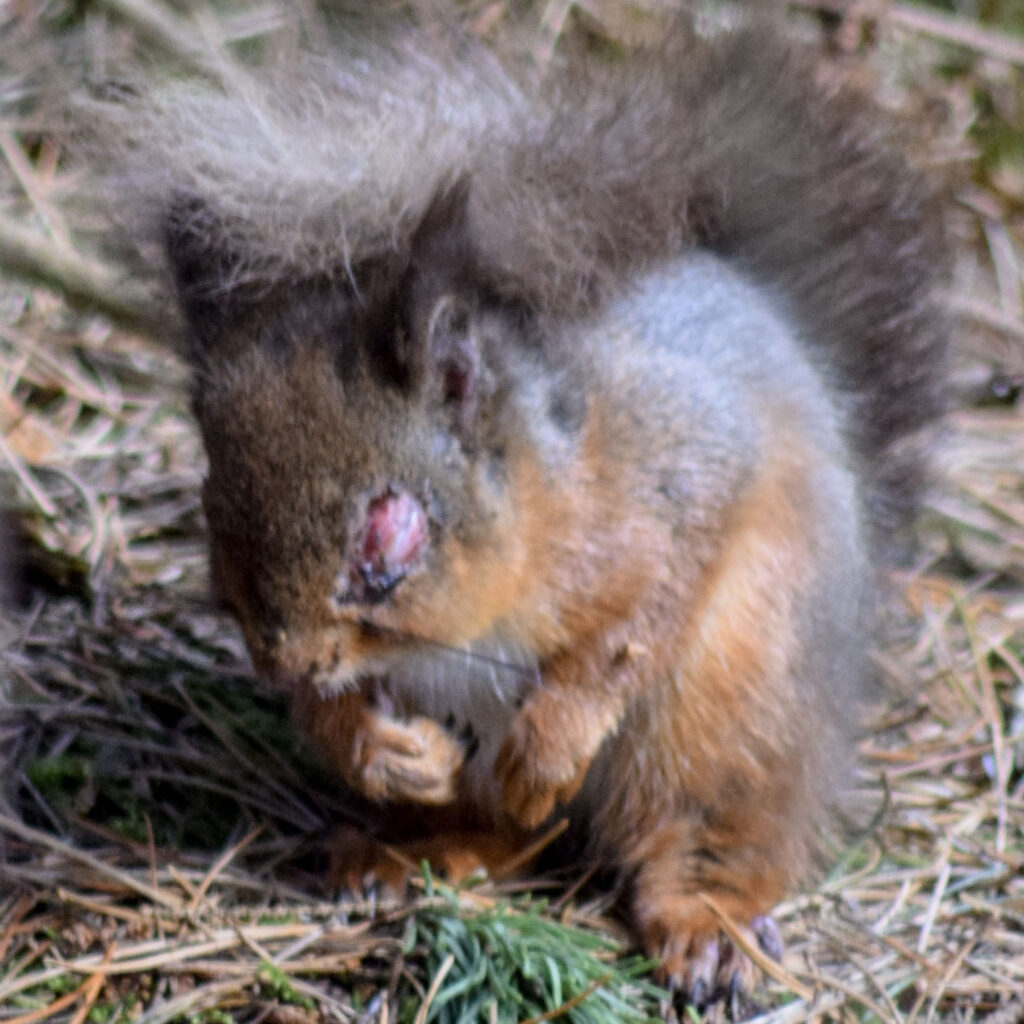 Saving Scotland’s Red Squirrels has confirmed that a squirrelpox outbreak is spreading along the Solway coast. Locals are urged to remain vigilant as this fatal disease could have serious consequences for the area’s red squirrel populations.

In recent weeks at least 15 red squirrels have died as a result of squirrelpox, with more sick squirrels spotted across an area that spans from Palnackie to Carsethorn. With the outbreak ongoing and continuing to spread, Saving Scotland’s Red Squirrels is calling on people to remove any wildlife feeding equipment and report squirrel sightings to the project.

Squirrelpox is a virus that is carried by grey squirrels without them being affected. Native red squirrels do not typically have immunity. Symptoms include lesions which prevent the red squirrel from eating, drinking or moving. As a result, it is usually fatal within two weeks and an outbreak can cause local numbers to crash.

Wildlife feeder boxes and garden bird tables increase the risk of squirrelpox transmission as they bring squirrels of both species into closer contact with one another. While the virus is initially spread by grey squirrels, once it has entered the red squirrel population, red-to-red squirrel transmission will also occur. It is therefore imperative that all squirrels are prevented from coming into close contact at feeders during an outbreak.

Although squirrelpox outbreaks have become relatively common in the south of Scotland, this area has not been known to suffer an outbreak before, and the effect has been particularly severe. A long-time red squirrel stronghold in Dumfries & Galloway, this part of the Solway coast has seen a small number of grey squirrels move into the area in recent times and begin to spread widely.

Dr Stephanie Johnstone, Conservation Officer for Saving Scotland’s Red Squirrels said: “With support of local volunteers from the Solway Forests Red Squirrel Network, we have deployed emergency squirrelpox outbreak response measures. Grey squirrels are being removed from the area through live trapping and humane dispatch. We know that when grey squirrel numbers are kept low, red squirrel populations can recover following the devastation of an outbreak. Any captured sick red squirrels will be taken to a veterinary clinic in Castle Douglas where they will be assessed and either treated or euthanised.”

Locals can help prevent further spread of the disease by refraining from feeding wildlife in their gardens while the outbreak is ongoing. Future outbreaks can be prevented by ensuring that wildlife feeding equipment is cleaned regularly and thoroughly with an anti-viral solution such as Virkon-S, available from local farm supply shops.

John Lind, who volunteers with the Solway Forests Red Squirrel Network said “The arrival of this disease in our area is very distressing. I have seen too many cases now and we need to try and combat the spread of this outbreak. One way people can help is by reporting sick red squirrels and healthy greys to us when they are seen.”

People across Scotland can support the Saving Scotland’s Red Squirrels project by reporting their sightings of both red and grey squirrels. Although squirrelpox is not considered harmful to humans, anyone who sees a sick red squirrel is advised not to approach it, but instead contact the project for advice.

Saving Scotland’s Red Squirrels is a partnership project led by the Scottish Wildlife Trust and made possible thanks to National Lottery players and the Dumfries & Galloway LEADER 2014 – 2020 programme.