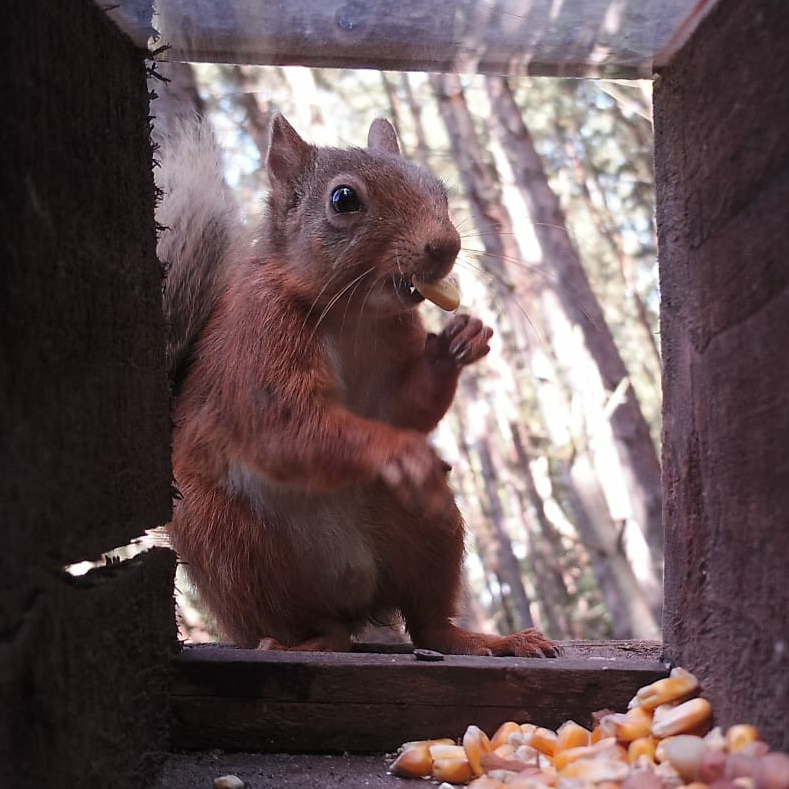 Monitoring Officer Nina Schönberg explains how we use camera traps to survey squirrels in Aberdeenshire, often with entertaining results!

On top of our regular hair sample-based surveys, in the North East we also run a camera-trapping survey in specially selected woodlands. Camera Traps (or Trail Cameras) are designed to detect movement and changes in temperature (i.e. body heat) in order to capture pictures of wildlife in their natural habitat without disturbing them, thus allowing the recording of natural behaviors. Most cameras let you choose between photos and video recording, and select the intervals between which photos will not be taken. In the North East, we use them in association with a specially designed camera box, which was developed by the James Hutton Institute. With the camera attached to the other end of the box, accompanied by a macro lens and with the box filled with feed in front of the camera, we’re able to capture beautiful close-up photos of any animal that comes to investigate!

We place the cameras high up (>3m) in the trees and leave them for two weeks, visiting halfway through to top up the feed (peanuts and maize). While this is done to ensure that any animal that lives in the woodland will find the boxes, in my experience it doesn’t seem to take them long at all! In fact, in some cases I can say they first show themselves on the camera within the first day or two and keep on coming back, and indeed I tend to find the boxes completely clean of any feed at most visits. We set up the cameras so that three consecutive photos are taken in five minute intervals (to enable us to confirm the species if one or more photos are blurry or overexposed). If the interval is not set up photos would be taken continuously and would fill up the SD cards very quickly, as the squirrels can sometimes spend a lot of time munching on their free food if nothing disturbs them. In fact, in one instance, it seemed like a red squirrel had a wee after-lunch nap on the box platform! Even with this method we tend to get hundreds of photos, sometimes thousands! I personally love conducting camera trapping; you never know what to expect when you’re going through the SD card and you can get beautiful and sometimes hilarious photos of all types of wildlife.

Camera trapping is a great way for us to conduct supplementary monitoring for red and grey squirrels between the surveys and in some cases this has proven very useful, like when species are recorded in a woodland where we have never recorded them before. I have to say the most exciting moment was back in November, when I caught a pine marten on the camera! While we do collect pine marten hair regularly (more and more each year, which is great news), we rarely catch them on camera. In this case, it was spotted in a Forestry Commission Scotland woodland, just outside the city of Aberdeen where they had never been recorded previously during our surveys. However, later investigation confirmed that we had in fact also picked up pine marten hair during our Autumn survey in the same woodland, and the adjacent woodland, which is very exciting and seems to indicate that it is there to stay. It remains unknown whether it may be the same individual in both woodlands as male pine martens may have territories that span across 25 square kilometers, or whether this may be two separate pine martens. I have recently put up two cameras in the second woodland, so fingers crossed there will be footage of a pine marten yet again!

While our main target for camera trapping may be squirrels, we also get plenty of birds, which is great as it keeps me on my toes with bird ID! Jays and great spotted woodpeckers are definitely the most common bird species detected on our cameras and they’re surprisingly expressive. Apart from these two species, I’ve recorded at least (carrion) crows, blue-, cole-, and great tits, wrens, plenty of robins, blackbirds and wood pigeons. I think everyone should give camera trapping a go and I’d consider it a worthwhile investment for anyone interested in recording what may live in their garden. You will have to consider camera placement depending on what you want to record. The two things we always pay attention to are glare and unwanted movement. Ideally, the camera would be facing between North West and North East to avoid being activated and over exposed by then sun. Secondly, it should be kept away from pointing towards moving objects such as moving branches or roads. While this cannot always be avoided, as we cannot control wind, its best to keep in mind in order to avoid filling up your SD car with photos of moving plants and keep enough space for the wee (and not so wee) critters!