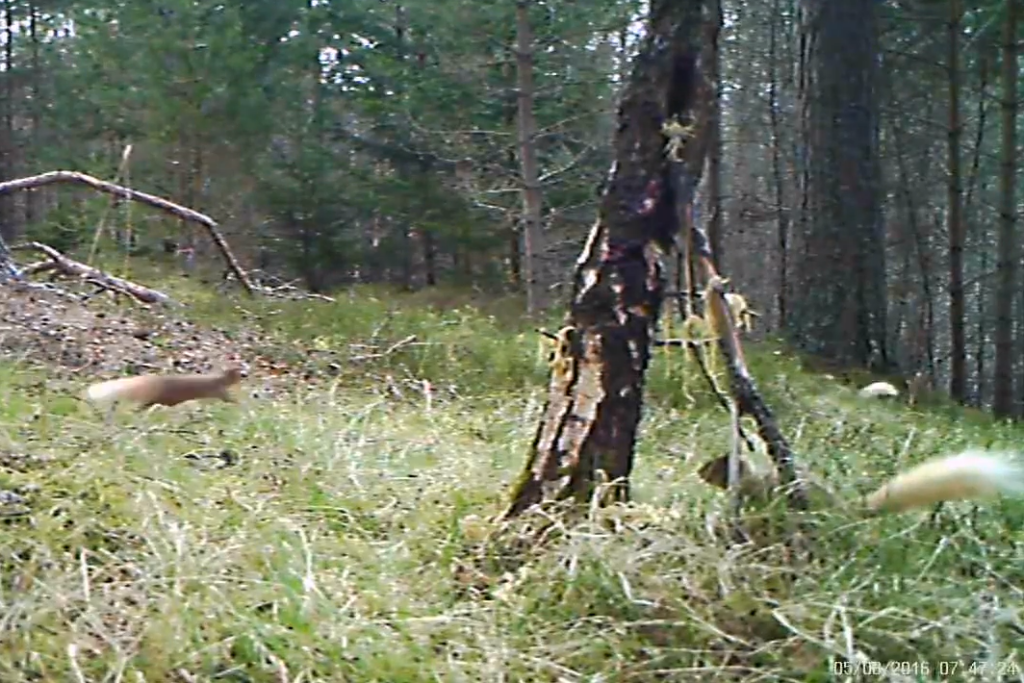 The SSRS team use trail cameras for much of our survey work. As these amazing devices have come down in price their popularity has risen and risen. And for good reason too – they are unobtrusive ways to observe your local wildlife. Even setting up a camera in your garden or local park could surprise – you often find foxes, roe deer, or maybe even a badger or hedgehog rooting about (they work in the dark too!).

We know many folks out there who use trail cams just for a bit of fun and take them with them on days out and holidays and so on. One of our survey volunteers, Gus, was away with his class on a field trip to Mar Lodge Estate in the Cairngorms. A stunning place a with a lot of wildlife, as any of you who have ever watched BBC Autumn or Winterwatch will know.

Gus set up his camera in the woods and put a wee bit of bait out in the hope of a few squirrels or maybe even a marten. The very first thing to find the bait was a marten! Then by day there were heaps of squirrels. See this link for a cool video of what is known, technically speaking, as a scurry of squirrels.

All very nice, but imagine Gus’ surprise to see this- watch it right to the end!

This footage was caught just after 6am in early May. It clearly shows a tawny owl swoop in and land on the tree just above where the squirrel was. Amazing! Now what we don’t know is what the tawny owl was up to. It may well have been sizing up the squirrel as prey, or perhaps there were mice or voles in amongst the bait and out of site of the camera. Fascinating stuff either way, and presumably a pretty rare encounter! Tawny owls are well monitored in the UK and I suspect if red squirrels popped up in their diet it would be reported, simply out of interest. There can’t be that much overlap between the strictly diurnal (active in daylight) red squirrel and the generally nocturnal tawny owl. Perhaps this owl was feeding young and was desperate for food!

Anyway, the red squirrel lived to fight another day which is good, and we wish that feisty tawny owl well too!