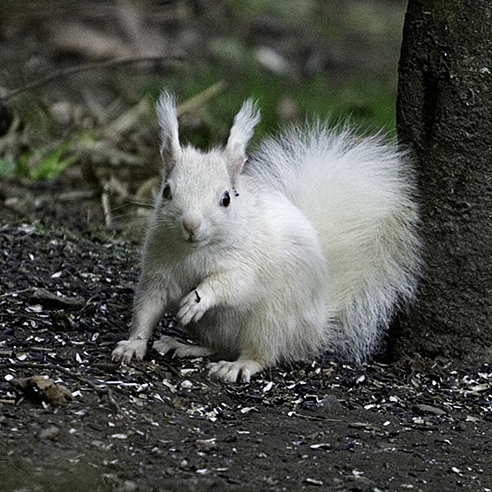 A rare white squirrel has been photographed near Dunkeld in Tayside.

Chris Eddington was taken by surprise while having breakfast when he spotted an unfamiliar animal in his garden through the kitchen window. With a camera close at hand, he managed to capture photographs of the visitor.

The sighting and photographs were reported to Saving Scotland’s Red Squirrels, a partnership project led by the Scottish Wildlife Trust, which monitors squirrel populations across Scotland.

Project staff have confirmed this is a native red squirrel with a condition called leucism.

Ann-Marie MacMaster, Saving Scotland’s Red Squirrels Conservation Officer for Tayside said: “Leucism is a genetic condition which causes loss of hair pigmentation. It is similar to albinism but does not affect eye colour.

“Chris’s pictures are some of the best images we’ve seen of a leucistic red squirrel. Its distinct ear tufts and delicate body shape and size clearly distinguish this animal from its non-native cousin, the grey squirrel.”

Tayside is an important area for red squirrel conservation. Work in the region is vital to prevent invasive grey squirrels from crossing the highland line and reaching the areas where the UK’s core red squirrel population resides.

Saving Scotland’s Red Squirrels has received a rise in squirrel sightings since the start of the lockdown, as people have more time to watch and record the wildlife they see.

Ann-Marie adds: “I have noticed a definite increase in the number of squirrel sightings since the government restrictions were put in place.

“Red squirrels are incredibly entertaining and charismatic creatures and those who find themselves with more time to observe them won’t be left disappointed. Thanks to players of the National Lottery, we are able to work with local communities to secure the future of the red squirrel.”

With the help of grey squirrel control staff, landowners and local volunteers, Saving Scotland’s Red Squirrels has started to reverse the trend of red squirrel decline in Tayside through targeted, landscape-scale control work.

Mr Eddington, who has been staying at home with his family during the lockdown, added: “I’ve never seen so many red squirrels as I have while I’ve been staying home during the day. We have a squirrel feeder and bird feeders in the garden, but I’d only ever seen one squirrel visiting our garden at a time. Since spending more time at home, we’ve managed to see three all at once, and now I’ve seen the leucistic red squirrel too!”

Any sightings of both red and grey squirrels seen from your window, garden or while taking daily exercise can be reported through the Saving Scotland’s Red Squirrels website, scottishsquirrels.org.uk.

Data from sightings helps the project monitor squirrel populations over time and forms the basis of long-term plans for red squirrel conservation.

Ann-Marie added: “It is important for people to continue to find ways to connect with nature during lockdown and a great way to do this is through window wildlife watching. They can still help protect Scotland’s red squirrels by reporting sightings through our website.”