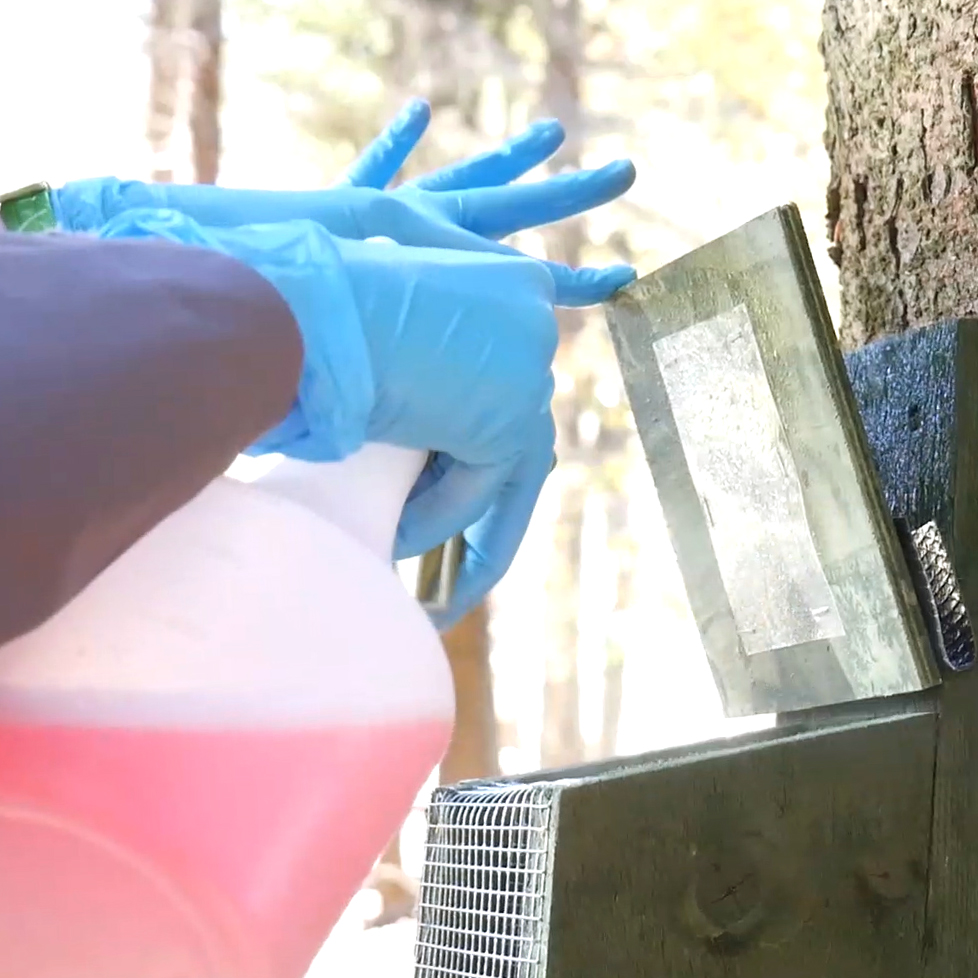 Professor Ronald J Roberts, Chairman of Bradan Biosecurity, discusses the importance of strong biosecurity protocols and how they can protect Scotland’s red squirrels from the threat of squirrelpox. He is a veterinary surgeon who has personally been involved in the development and testing of Virkon ®S, a broad-spectrum disinfectant, for the last 20 years. Virkon ®S is used across the Saving Scotland’s Red Squirrels project to reduce the risk of squirrelpox spread.

Biosecurity is big news at present due to our concerns about the new Coronavirus in humans. In Britain, another virus, spread between squirrel species has proven invariably lethal to its new host – the native red squirrel.

Squirrelpox is a pox virus with many of the characteristics of the smallpox and chickenpox viruses, it is not classified directly within the Parapoxvirus group – it is an outlier. Carried by American grey squirrels (Sciurus carolinensis) without effect, squirrelpox is commonly found in greys from Ontario down to the Carolinas of Eastern North America. It is not known when squirrelpox came to UK but it was first confirmed in East Anglia in the 1980’s and has gradually moved northwards. Red squirrels, (Sciurus vulgaris) our native species, are under threat from loss of habitat and competition with the larger introduced grey squirrel. Now it has been found that when there is cross-infection with the pox virus from grey squirrel carriers, eradication of the reds can be around 20% faster than through competition alone.

The red squirrel is both an iconic British species and also a delightful component of the Northern British woodland habitat. Many people are therefore keen to do what they can to help maintain their presence. Feeding stations for red squirrels in gardens and in woodlands are often provided to help the reds compete. In certain areas, it is however extremely difficult to keep grey squirrels out of feeding zones and so unless great care is taken, these can become a major focus for transferring the virus from carrier greys to the completely vulnerable reds. So susceptible are the red squirrels to the disease that it usually proves to be fatal within two weeks.

The squirrelpox virus is a very resistant virus. It presents itself in the form of ulcers, pus discharges and lesions on the skin and around the eyes and mouth, which are the clinical signs of the disease. Contact from an infected squirrel on a feeding station can be particularly infectious as the virus survives on surfaces for many days. It is this high infectivity over the long survival time of the virus and the frequency of contact on and around feeding areas that renders it so effective at transmission; making the biosecurity of such areas so important.

Cleaning with soapy water and a scrubbing brush is fine for removing old food and organic material from feeding stations, but for biosecurity against pox viruses strong virucidal treatment of the area is essential. Virkon ®S has been used on cruise ships for norovirus infections and in farms with foot and mouth outbreaks, and is now proven effective against squirrelpox, the various squirrel bacteria and Squirrel Adenovirus infections which are less common but equally significant.

Virkon ®S comes in the form of a pink tablet, which is made up for use at a rate of 1% – that is 10 grams (two tablets) per litre of water. It should be made up in fresh water and is recommended to be sprayed (for example with a garden plant sprayer) to thoroughly wet every surface. It can then be left to do its work and dry as the residues are all broken down to safe end products within 15-30 minutes.

Disposal of any remaining material is easy, as it can be safely poured down drains or over gravel without any problems after the solution has been deactivated (one week after the mixture has been made).


During a squirrelpox outbreak, Saving Scotland’s Red Squirrels will advise on the best means of action for the area, often this entails disinfecting feeders, taking them down and refraining from supplementary feeding for the duration of the outbreak. There is no evidence that squirrelpox can cause any harm to humans, however sensible precautions should be undertaken when approaching any dead or sick wild animal.

Specific instructions for the use of Virkon ®S by volunteers in the Saving Scotland’s Red Squirrels annual Spring Survey are available to review online within the community hub resources. Please note that Virkon ®S is not suitable for use indoors, and is not safe for humans. It is classified as an irritant and should always be handled following the correct safety precautions, and only used for its intended purpose.