This week we are sadly saying goodbye to Matt Nuttall, our Conservation Officer for north east Scotland. Over the past year Matt has worked tirelessly in his mission to see red squirrels return to Aberdeen, with the help of Grey Squirrel Officers and a dedicated network of volunteers.

Matt reflects on his time with Saving Scotland’s Red Squirrels, and shares his optimism for the future. 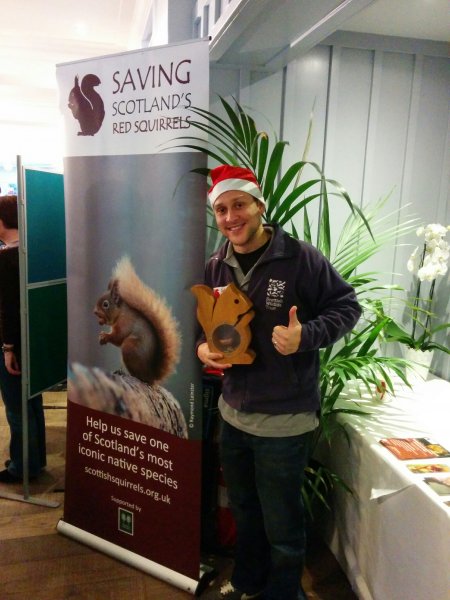 Hi Matt! How has the situation in north east Scotland changed since you started the job?

I’ve been amazed by the progress I’ve seen. The number of sites around Aberdeenshire that have large grey squirrel populations is decreasing, and the number of sites showing signs of red squirrel recovery is increasing rapidly. Of course, this success is the result of many years of hard work by a huge number of people, and progress has been steady since the project began in 2009.

I think the biggest change we’re seeing is in Aberdeen itself, where there’s been increasing reports of red squirrels in areas which have had only grey squirrels for decades. For example, this year we caught our first red squirrel in a trap in Seaton Park after over seven years of grey squirrel control (red squirrels are of course released, unharmed). Also within the last year we’ve had reports from the public showing red squirrels reappearing along the river Dee, the river Don, around the University of Aberdeen, and in the urban areas east of Hazlehead Park.

“It’s fantastic when we get these excited calls from the public, having seen a red squirrel in their garden for the first time in 30 years.  It makes you realise how important the project is not only for red squirrels, but also for the people of Scotland.”

What’s been the highlight of your time with Saving Scotland’s Red Squirrels?

I’ve had a fantastic year, with many highlights!  If I had to choose, I would say getting the results from the spring survey back.  After our preliminary analysis was done, we could see that the distribution of grey squirrels has reduced year on year, and the distribution of red squirrels has been steadily increasing. Furthermore, the tetrads (2km x 2km survey squares) that have shown the most positive trends were in the areas where we have been putting the most effort into grey squirrel control, suggesting that our efforts are paying off!  All credit must go to our Grey Squirrel Officers, whose dedication and professionalism are a credit to the project.

What are the biggest challenges going forward in the north east?

The north east is in a unique situation whereby eradication, or at least near-eradication, of grey squirrels is a realistic goal. If this was achieved, it would mean that everywhere north of the highland boundary fault would be red squirrel-only, and those populations of red squirrels would be the largest and most secure in mainland Britain.

However, achieving eradication is remarkably difficult, and as the density of grey squirrels is reduced and the populations become more fragmented, it becomes more and more difficult to control them.

Thanks to the Heritage Lottery Fund, we are embarking on the ‘Developing Community Action’ phase of the project, increasing the level of involvement of our volunteers and local communities.  They will be pivotal in making sure that there is a rapid response system in place in the event of a grey squirrel population surge.

“I certainly don’t think the challenge is too large – in fact I think it’s exciting!  We have such an incredible team of volunteers across Scotland, and I have no doubt that the future is bright for the project.”

Where are you off to next?

Before my wife and I moved to Aberdeen last year, we spent four years living in the north east (coincidence?!) of Cambodia, working for an international conservation NGO which supported the Cambodian government to manage their protected area network.

During my time there I developed a PhD project focusing on landscape-level decision making and national park planning. The project was recently awarded a full scholarship from the Natural Environment Research Council. So as of October I shall be starting my PhD at Stirling University, with occasional trips back to Cambodia which will be most welcome!

My wife will still be based at Aberdeen University, so we’ll be relocating to Angus which is roughly half way in between. Ann-Marie and Clare can expect lots of squirrel sightings reported on the website from me 🙂