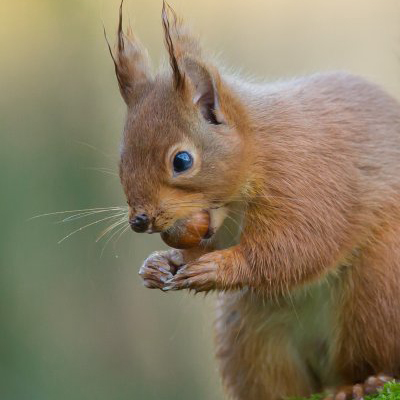 The Scottish Wildlife Trust has been awarded a grant of £2.46 million from the Heritage Lottery Fund (HLF) for the Saving Scotland’s Red Squirrels – Developing Community Action project.

Over the next five years Saving Scotland’s Red Squirrels will enlist many more volunteers from communities in our three key regions to carry out practical work to protect and strengthen red squirrel populations in their local area, and in turn safeguard squirrels across Scotland.

We aim to provide high quality training and support to hundreds of local people and land managers to take on a vital role in the long–term protection of the country’s red squirrels.Scotland is home to just 120,000 red squirrels, three quarters of the UK population. The main threat to native squirrels comes from competition with invasive non-native grey squirrels and the spread of the deadly squirrelpox virus.

Dr Mel Tonkin, Saving Scotland’s Red Squirrels Project Manager said: “Our work since 2009 shows that through targeted control of grey squirrels it is possible to reverse the decline of our native reds and help them to return to former territories.

“Red squirrels are one of Scotland’s most-loved species. Thanks to National Lottery players we will be able to empower communities to help protect not just their local red squirrels, but major populations of the species in Scotland, and ensure that future generations can continue to see these special animals.”

Roseanna Cunningham MSP, Cabinet Secretary for Environment, Climate Change and Land Reform said: “This investment to protect our red squirrels is very welcome as they are a priority species that we need to do all we can to help.

“Saving Scotland’s Red Squirrels has led important work to conserve them since 2009 so it is fantastic that players of the National Lottery will help to mobilise communities to take practical action to protect one of our best loved animals.”

Lucy Casot, Head of the Heritage Lottery Fund in Scotland, said: “Many of us have a soft spot for red squirrels and sighting one in the flesh is an exciting, but sadly increasingly rare experience. Thanks to National Lottery players’ support, we’re helping organisations and communities protect and care for Scotland’s red squirrels, which represent three quarters of the UK’s dwindling population.

“We’ve been impressed with Scottish Wildlife Trust’s collaborative approach to help save this beautiful species and look forward to seeing the project progress in the coming months and years.”

Saving Scotland’s Red Squirrels aims to secure the long-term future of red squirrels in Scotland by supporting volunteers and land managers in three key areas to work to save the species.

In Aberdeen City and Aberdeenshire, where grey squirrel populations have been significantly reduced in the last eight years, the project will continue to work towards making the area a grey-squirrel free zone by developing a rapid response system to detect and remove residual individuals.

In the Central Lowlands, coordinated control of grey squirrels will prevent them from becoming established to the north of the ‘Highland Line’, home to the UK’s largest population of red squirrels that are unaffected by greys.

In Southern Scotland, we will focus work on eight Priority Areas for Red Squirrel Conservation (PARCs). Saving Scotland’s Red Squirrels will be able to significantly increase our investment  in communities, to create networks of local people who are able to make an important ecological impact by monitoring squirrel numbers and trapping greys that would otherwise oust local red squirrels, making them more resilient to changes and safeguarding important populations for Scotland.

We will also create widespread understanding and appreciation of the current risks to red squirrels and demonstrate the methods used to successfully protect red squirrels.

Through an eight-year trial our innovative partnership has established that it is possible to halt the decline of red squirrels through co-ordinated grey squirrel control.

About the Heritage Lottery Fund – Thanks to National Lottery players, HLF invests money to help people across the UK explore, enjoy and protect the heritage they care about – from the archaeology under our feet to the historic parks and buildings we love, from precious memories and collections to rare wildlife. Since 1994, they have invested over £800m in more than 3800 heritage projects across Scotland. Visit www.hlf.org.uk.