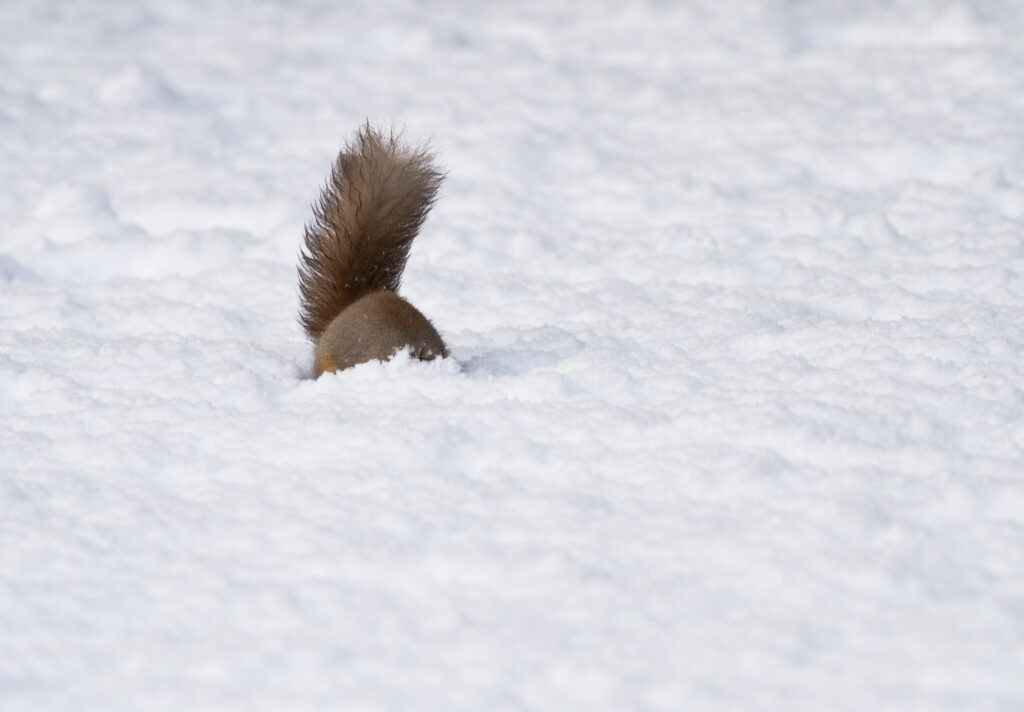 How do squirrels survive the winter?  Do they hibernate?  The cold weather is a tough time for animals, how do they managed to stay warm?

Winter has arrived in Scotland. People are trudging home in the dark at 4 o’clock, and newspapers are threatening blizzards, and “the coldest winter on record”, which never materialises. Red squirrels, meanwhile are haring around, eating what they can, burying nuts, and scurrying in the direction of their dreys.

Contrary to popular belief, squirrels do not hibernate. However they do spent less time in search of food, and more time sleeping. To provide warmth and protection from the elements during the coldest months, squirrels build winter dreys. Unlike summer dreys, which are open platforms, similar in design to birds’ nests, winter dreys are broadly spherical and enclosed, but for a small entrance hole. They are constructed of interwoven twigs on the outside with softer furnishings of moss and dried leaves to give some home comforts on the inside.

New dreys are usually built, and existing ones renovated and repaired throughout the Autumn. However, as they are often positioned high up in trees, they tend only to become visible when deciduous trees drop their leaves.  Squirrels will often own and maintain several dreys, to allow them to retreat to another warm home in the event that the ‘principle residence’ is destroyed or damaged by the elements or other animals, or is infested by creepy-crawlies.

A surprisingly common occurrence is the sharing of dreys by squirrels, something which they seem to be happy to do, with the added body heat lending appeal to the convivial vibe. Even more surprising is the fact that there is a squirrel ‘time share’ arrangement, whereby a squirrel will spend the winter occupying another squirrel’s drey, showing us that in the harshest of conditions, ownership is put aside in favour of mutual survival.