Red Squirrel © No Bad Photos
Skip to content
Home / Posts from 13th November 2015 / How can we reduce road deaths?

We field numerous enquiries each year about what we can do to reduce red squirrel casualties on our roads. It’s not a simple issue to tackle, but here are our thoughts.

Have you ever seen a red squirrel dead on the side of the road? According to the Peoples Trust for Endangered Species (PTES) over 1 million animals are killed on UK roads every year. 3% of all red squirrels sightings records through our website from 2014 and 2015 were reported as dead on the road. I don’t think these figures are representative of the reality and would estimate that in fact far more red squirrels are killed on our roads. We know it is a problem in certain areas and we speak to a lot of people who are very concerned and want to take action. But what can you do?

Red squirrels will come to ground when foraging for food, dispersing, or looking for a mate. Unfortunately they have no road sense and do not adhere to ‘Stop! Look! Listen!’. Common interventions to reduce road deaths include the use of SLOW DOWN SQUIRREL CROSSING traffic signs and rope bridges strung up in the canopy allowing the squirrel to pass over the road without ever leaving the treetops. But are these methods effective?

Road signs may be a useful tool in informing people that red squirrels are in the area, and may raise awareness of the problem. However it is important to avoid an over proliferation of these signs, as this will dilute their effectiveness. In addition most local councils will not permit the erection of such signs on council land, i.e. roadsides and so creative measures have to be taken to display them. In some areas they are strapped to the side of private bins on the street or hung from peoples garden walls. Do drivers actually slow down when they see them? How slow are we expecting them to go?  In 2013 Perth & Kinross Council carried out an experiment looking at traffic speed before and after red squirrel warning signs were erected. They measured the speed of traffic along a section of road on the edge of Blairgowrie. Maximum and average speeds were measured, then ‘official’ council road signs were put up. The sad news is that the average speed of traffic fell by a disappointing 0.7 mph! However, on the up side the number of red squirrels killed there fell dramatically. Red squirrels were still present throughout, so maybe enough people paid attention and avoided the squirrels.

Sometimes putting a specific message on signs catches people’s attention better. This sign was put up in Angus last autumn. The main issue here was an avenue of hazels nearby which was attracting the local red squirrels. Autumn is also a bad time for road casualties as young animals are just dispersing from where they were born. 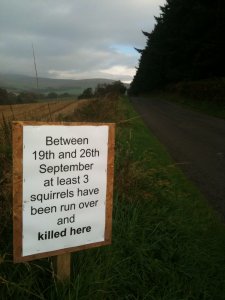 It must be borne in mind that road signage is there for driver and pedestrian safety, not that of wildlife.

Rope bridges are a not a novel concept. The first known bridge of this kind was erected in 1963 in Longview, Washington, US for arboreal mammals. The idea of creating a route among the canopy for the red squirrel (and pine martens!) to cross the road safely seems like a good one. But do our furry friends recognise and make use of them? A master’s student in 2008 investigated this on the west coast of Scotland on the Cowal peninsula. Using camera traps, hair-tube surveys and clay footprint pads he recorded the use of 6 different rope bridges. It was shown that rope bridges can be successfully installed in areas of high squirrel populations to connect areas of habitat, that there is little or no habituation period required by the squirrels before the bridges are used, and that baiting of the bridges will increase their use.

Rope bridge locations need to be carefully planned. Identify where the red squirrels cross the road. Where do you see dead red squirrels? Once a bridge has been installed, offering a tasty food treat from a food hopper can encourage squirrels to cross using the rope bridge.

Before you erect a bridge you will need to: